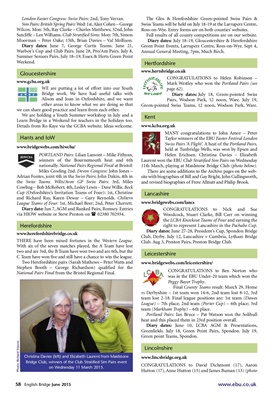 WE are putting a lot of effort into our Youth

Bridge work. We have had useful talks with

Alison and Joan in Oxfordshire, and we want

other areas to know what we are doing so that

we can share good practice and learn from each other.

We are holding a Youth Summer workshop in July and a

Learn Bridge in a Weekend for teachers in the holidays too.

Details from Ro Kaye via the GCBA website. Ideas welcome.

winners of the Bournemouth heat and 6th

THERE have been mixed fortunes in the Western League.

With six of the seven matches played, the A Team have lost

C Team have won five and still have a chance to win the league.

Swiss Teams will be held on July 18-19 at the Larruperz Centre,

Ross-on-Wye. Entry forms are on both counties' websites.

MANY congratulations to John Amor - Peter

Swiss Pairs 'A Flight'. A heat of the Portland Pairs,

held at Tunbridge Wells, was won by Epsen and

with biographies of Bill and Gay Bright, John Culling worth,

and revised biographies of Frere Allnutt and Philip Brook.

CONGRATULATIONS to Nick and Sue

the LCBA Knockout Teams of Four and earning the

right to represent Lancashire in the Pachabo Cup.

CONGRATULATIONS to Ben Norton who

was in the EBU Under-20 team which won the

heat and this placed them in 23rd position overall.