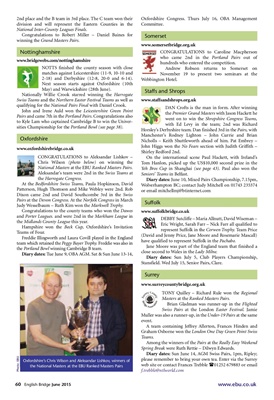 2nd place and the B team in 3rd place. The C team won their

division and will represent the Eastern Counties in the

Next season starts against Oxfordshire (10th

May) and Warwickshire (28th June).

Swiss Teams and the Northern Easter Festival Teams as well as

qualifying for the National Pairs Final with Daniel Crook.

Pairs and came 7th in the Portland Pairs. Congratulations also

Chris Wilson (photo below) on winning the

Aleksandar's team were 2nd in the Swiss Teams at

Dixon came 2nd and David Southcombe 3rd in the Swiss

Pairs at the Devon Congress. At the Norfolk Congress in March

Congratulations to the county teams who won the Dawes

and Porter Leagues. and were 2nd in the Markham League in

the Midlands County League this year.

Freddie Illingworth and Laura Covill played in the England

team which retained the Peggy Bayer Trophy. Freddie was also in

who came 2nd in the Portland Pairs out of

hundreds who entered the competition.

Andrew Robson returns to Somerset on

November 19 to present two seminars at the

DAN Crofts is the man in form. After winning

the Premier Grand Masters with Jason Hackett he

went on to win the Shropshire Congress Teams,

with Ed Levy in the team; 2nd was Richard

Horsley's Derbyshire team. Dan finished 3rd in the Pairs, with

Nicholls - Keith Shuttleworth ahead of him. Pat Embrey -

On the international scene Paul Hackett, with Ireland's

have qualified to represent Suffolk in the Pachabo.

Jane Moore was part of the England team that finished a

close second to Wales in the Lady Milne.

Masters at the Ranked Masters Pairs.

Brian Gladman was runner-up in the Flighted

Muller was also a runner-up, in the Under-19 Pairs at the same

Among the winners of the Pairs at the Really Easy Weekend

please remember to bring your own tea. Enter via the Surrey

the National Masters at the EBU Ranked Masters Pairs