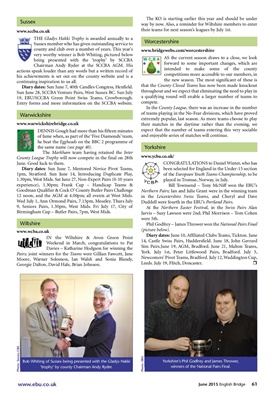 THE Gladys Hakki Trophy is awarded annually to a

Sussex member who has given outstanding service to

county and club over a number of years. This year's

being presented with the 'trophy' by SCCBA

Chairman Andy Ryder at the SCCBA AGM. His

actions speak louder than any words but a written record of

continuing inspiration to us all.

Entry forms and more information on the SCCBA website.

DENNIS Gough had more than his fifteen minutes

of fame when, as part of the 'Five Diamonds' team,

he beat the Eggheads on the BBC 2 programme of

The Markham team having retained the Inter

County League Trophy will now compete in the final on 28th

June. Good luck to them.

IN the Wiltshire & Avon Green Point

Weekend in March, congratulations to Pat

Davies - Katharine Hodgson for winning the

Pairs; joint winners for the Teams were Gillian Fawcett, Jane

The KO is starting earlier this year and should be under

way by now. Also, a reminder for Wiltshire members to enter

their teams for next season's leagues by July 1st.

AS the current season draws to a close, we look

forward to some important changes, which are

intended to make some of the county

competitions more accessible to our members, in

the new season. The most significant of these is

that the County Closed Teams has now been made knockout

throughout and we expect that eliminating the need to play in

a qualifying round will enable a larger number of teams to

In the County League, there was an increase in the number

of teams playing in the No-Fear divisions, which have proved

their matches in the daytime rather than the evening, we

expect that the number of teams entering this very sociable

and enjoyable series of matches will continue.

CONGRATULATIONS to Daniel Winter, who has

been selected for England in the Under-15 section

of the European Youth Teams Championship, to be

played in Tromsø, Norway, in July.

Northern Pairs; Ian and Julie Grant were in the winning team

in the Leicestershire Swiss Teams, and Cheryl and Dave

Duddell were fourth in the EBU's Portland Pairs.

At the Northern Easter Festival, in the Swiss Pairs Alan

Bob Whiting of Sussex being presented with the Gladys Hakki

winners of the National Pairs Final.