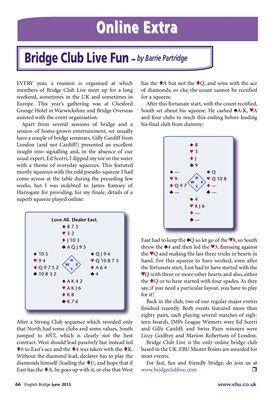 EVERY year, a reunion is organised at which

members of Bridge Club Live meet up for a long

Europe. This year's gathering was at Chesford

assisted with the event organisation.

Apart from several sessions of bridge and a

session of home-grown entertainment, we usually

have a couple of bridge seminars. Gilly Cardiff from

London (and not Cardiff!) presented an excellent

insight into signalling and, in the absence of our

usual expert, Ed Scerri, I dipped my toe in the water

with a theme of everyday squeezes. This featured

mostly squeezes with the odd pseudo-squeeze I had

come across at the table during the preceding few

weeks, but I was indebted to James Ramsey of

Harrogate for providing, for my finale, details of a

After a Strong Club sequence which revealed only

that North had some clubs and some values, South

jumped to 6NT, which is clearly not the best

contract. West should lead passively but instead led

t5 to East's ace and the t4 was taken with the tK.

Without the diamond lead, declarer has to play the

diamonds himself (leading the tJ), and hope that if

East has the tA, he goes up with it, or else that West

has the tA but not the tQ, and wins with the ace

of diamonds, or else the count cannot be rectified

After this fortunate start, with the count rectified,

South set about his squeeze. He cashed ´A-K, ™A

and four clubs to reach this ending before leading

his final club from dummy:

threw the ´4 and then led the ™3, finessing against

the ™Q and making the last three tricks in hearts in

hand. For this squeeze to have worked, even after

the fortunate start, East had to have started with the

™Q with three or more other hearts and also, either

the tQ or to have started with four spades. As they

say, if you need a particular layout, you have to play

Back in the club, two of our regular major events

and Gilly Cardiff, and Swiss Pairs winners were

Bridge Club Live is the only online bridge club

based in the UK. EBU Master Points are awarded for

For fast, fun and friendly bridge, do join us at