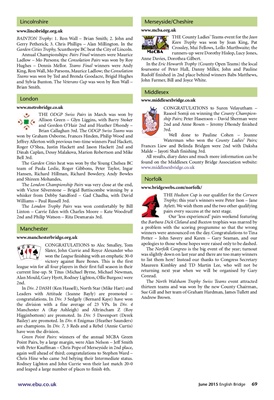 Garden Cities Trophy, Scunthorpe BC beat the City of Lincoln.

Ladlow - Mo Parsons; the Consolation Pairs was won by Roy

Teams was won by Ted and Brenda Goodacre, Brigid Hughes

and Sylvia Bunton. The Veterans Cup was won by Ron Wall -

THE ODGP Swiss Pairs in March was won by

The Garden Cities heat was won by the Young Chelsea BC

The London Championship Pairs was very close at the end,

with Victor Silverstone - Brigid Battiscombe winning by a

The London Trophy Pairs was won comfortably by Bill

won the League finishing with an emphatic 30-0

victory against Bare Bones. This is the first

have won the division.

with Peter Kauffman - Chris Pope of Merseyside in 2nd place,

again well ahead of third; congratulations to Stephen Ward -

and leaped a large number of places to finish 4th.

THE County Ladies' Teams event for the Jean

In the Eric Howarth Trophy (County Open Teams) the local

Frances Liew and Belinda Bridgen were 2nd with Daksha

All results, diary dates and much more information can be

THE Hudson Cup is our qualifier for the Corwen

Aylett. We wish them and the two other qualifying

pairs every success at the next stage.

the Barbara Dick Cleland and Buxton trophies was marred by

a problem with the scoring programme so that the wrong

winners were announced on the day. Congratulations to Tina

Potter - John Savery and Karen - Gary Seaman, and our

apologies to those whose hopes were raised only to be dashed.

The Norfolk Congress is the big event of the year; turnout

to list them here! Instead our thanks to Congress Secretary

Maureen Kimbley and TD Martin Lee, who will not be

returning next year when we will be organised by Gary

thirteen teams and was won by the new County Chairman,

Sue Gill and her team of Graham Hardman, James Tullett and