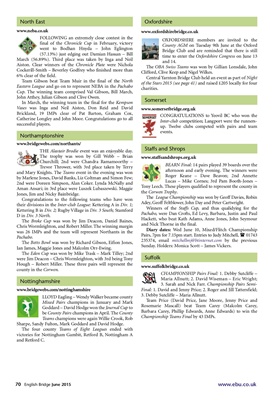 FOLLOWING an extremely close contest in the

final of the Chronicle Cup in February, victory

Aiston. Clear winners of the Chronicle Plate were Nichola

Team Gibson beat Team Muir in the final of the North

Eastern League and go on to represent NEBA in the Pachabo

In March, the winning team in the final for the Kempson

Vases was Inga and Neil Aiston, Don Reid and David

Catherine Longley and John Moor. Congratulations go to all

THE Alastair Brodie event was an enjoyable day.

The trophy was won by Gill Webb - Brian

and Mary Knights. The Teams event in the evening was won

Congratulations to the following teams who have won

their divisions in the Inter-club League: Kettering A in Div. 1;

Kettering B in Div. 2; Rugby Village in Div. 3 South; Stamford

The Broke Cup was won by Jim Deacon, Daniel Baines,

was 26 IMPs and the team will represent Northants in the

The Betts Bowl was won by Richard Gibson, Eifion Jones,

were Jim Deacon - Chris Wormleighton, with 3rd being Tony

Hough - Robert Miller. These three pairs will represent the

county in the Corwen.

be County Pairs champions in April. The County

The four county Teams of Eight Leagues ended with

OXFORDSHIRE members are invited to the

County AGM on Tuesday 9th June at the Oxford

Bridge Club and are reminded that there is still

time to enter the Oxfordshire Congress on June 13

The OBA Swiss Teams was won by Gillian Lonsdale, John

CONGRATULATIONS to Yeovil BC who won the

Inter-club competition; Langport were the runnersup.

afternoon and early evening. The winners were

Tony Leech. These players qualified to represent the county in

The League Championship was won by Geoff Davies, Robin

Winners of the Staffs Cup, and thus qualidying for the

and Nick Thorne in the final.

235374, email mitchellmj@btinternet.com by the previous