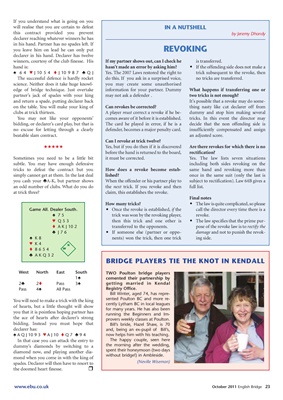 If you understand what is going on you

will realise that you are certain to defeat IN A NUTSHELL

this contract provided you prevent by Jeremy Dhondy

declarer reaching whatever winners he has

in his hand. Partner has no spades left. If

you leave him on lead he can only put REVOKING

declarer in his hand. Declarer has twelve

winners, courtesy of the club finesse. His If my partner shows out, can I check he is transferred.

hand is: hasn't made an error by asking him? • If the offending side does not make a

The successful defence is hardly rocket do this. If you ask in a surprised voice, no tricks are transferred.

science. Neither does it take huge knowl- you may create some unauthorised

edge of bridge technique. Just overtake information for your partner. Dummy What happens if transferring one or

partner’s jack of spades with your king may not ask a defender . two tricks is not enough?

and return a spade, putting declarer back It's possible that a revoke may do some-

on the table. You will make your king of Can revokes be corrected? thing nasty like cut declarer off from

clubs at trick thirteen. A player must correct a revoke if he be- dummy and stop him making several

You may not like your opponents’ comes aware of it before it is established. tricks. In this event the director may

bidding, or declarer’s card play, but that is The card he played in error, if he is a decide that the non offending side is

no excuse for letting through a clearly defender, becomes a major penalty card. insufficiently compensated and assign

Can I revoke at trick twelve?

HHHHH Yes, but if you do then if it is discovered Are there revokes for which there is no

before the hand is returned to the board, rectification?

Sometimes you need to be a little bit it must be corrected. Yes. The law lists seven situations

subtle. You may have enough defensive including both sides revoking on the

simply cannot get at them. In the last deal lished? once in the same suit (only the last is

you cash your ®A-K, but partner shows When the offender or his partner play to subject to rectification). Law 64B gives a

an odd number of clubs. What do you do the next trick. If you revoke and then full list.

at trick three? claim, this establishes the revoke.

How many tricks? • The law is quite complicated, so please

Game All. Dealer South. • Once the revoke is established, if the call the director every time there is a

´ 75 trick was won by the revoking player, revoke.

t A K J 10 2 transferred to the opponents. pose of the revoke law is to rectify the

´ K8 nents) won the trick, then one trick ing side.

1´ cemented their partnership by

cently Lytham BC in local leagues

of hearts, but a little thought will show

for many years. He has also been

the ace of hearts after declarer’s strong provers weekly classes at Poulton.

bidding. Instead you must hope that Bill’s bride, Hazel Shaw, is 70

declarer has: and, being an ex-pupil of Bill’s,

In that case you can attack the entry to The happy couple, seen here

dummy’s diamonds by switching to a the morning after the wedding,

without bridge!) in Ambleside.

mond when you come in with the king of

spades. Declarer will then have to resort to (Neville Wiseman)