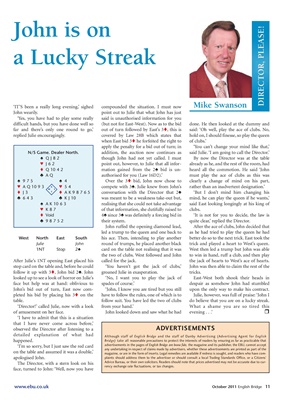 ‘IT’S been a really long evening,’ sighed compounded the situation. I must now Mike Swanson

John wearily. point out to Julie that what John has just

‘Yes, you have had to play some really said is unauthorised information for you

difficult hands, but you have done well so (but not for East-West). Now as to the bid done. He then looked at the dummy and

far and there’s only one round to go,’ out of turn followed by East’s 3t, this is said: ‘Oh well, play the ace of clubs. No,

replied Julie encouragingly. covered by Law 28B which states that hold on, I should finesse, so play the queen

when East bid 3t he forfeited the right to of clubs.’

apply the penalty for a bid out of turn; in ‘You can’t change your mind like that,’

N/S Game. Dealer North. addition, the auction now continues as said Julie. ‘I am going to call the Director.’

´ QJ82 though John had not yet called. I must By now the Director was at the table

™ J62 point out, however, to Julie that all infor- already as he, and the rest of the room, had

™ K87 of that information, she dutifully raised to clubs.

t Void 4´ since 3´ was definitely a forcing bid in ‘It is not for you to decide, the law is

John ruffed the opening diamond lead, After the ace of clubs, John decided that

West North East South his ace. Then, intending to play another better do so to the next trick. East took the

Julie John round of trumps, he placed another black trick and played a heart to West’s queen.

the two of clubs. West followed and John to win in hand, ruff a club, and then play

After Julie’s 1NT opening East placed his called for the jack. the jack of hearts to West’s ace of hearts.

stop card on the table and, before he could ‘You haven’t got the jack of clubs,’ John was then able to claim the rest of the

follow it up with 3t, John bid 2´. John groaned Julie in exasperation. tricks.

looked up to see a look of horror on Julie’s ‘No, I want you to play the jack of East-West both shook their heads in

face but help was at hand: oblivious to spades of course.’ despair as somehow John had stumbled

John’s bid out of turn, East now com- ‘John, I know you are tired but you still upon the only way to make his contract.

pleted his bid by placing his 3t on the have to follow the rules, one of which is to Julie, however, was full of praise: ‘John I

table. follow suit. You have led the two of clubs do believe that you are on a lucky streak.

‘Director!’ called Julie, now with a look from your hand.’ What a shame you are so tired this

of amusement on her face. John looked down and saw what he had evening . . .’ r

‘I have to admit that this is a situation

that I have never come across before,’

observed the Director after listening to a ADVERTISEMENTS

happened. Bridge) take all reasonable precautions to protect the interests of readers by ensuring as far as practicable that

‘I’m so sorry, but I just saw the red card advertisements in the pages of English Bridge are bona fide, the magazine and its publisher, the EBU, cannot accept

any undertaking in respect of claims made by advertisers, whether these advertisements are printed as part of the

on the table and assumed it was a double,’ magazine, or are in the form of inserts. Legal remedies are available if redress is sought, and readers who have com-

apologised John. plaints should address them to the advertiser or should consult a local Trading Standards Office, or a Citizens’

The Director, with a stern look on his Advice Bureau, or their own solicitors. Readers should note that prices advertised may not be accurate due to cur-

face, turned to John: ‘Well, now you have