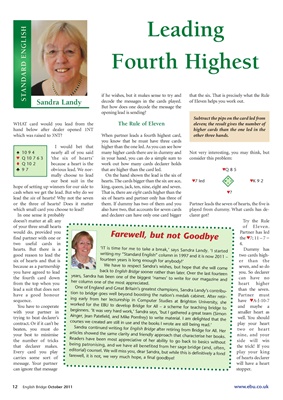 if he wishes, but it makes sense to try and that the six. That is precisely what the Rule

Sandra Landy decode the messages in the cards played. of Eleven helps you work out.

But how does one decode the message the

Subtract the pips on the card led from

WHAT card would you lead from the The Rule of Eleven eleven; the result gives the number of

which was raised to 3NT? When partner leads a fourth highest card, other three hands.

you know that he must have three cards

I would bet that higher than the one led. As you can see how

´ 10 9 4 nearly all of you said many higher cards there are in dummy and Not very interesting, you may think, but

our best suit in the hearts. The cards bigger than the six are ace, ™7 led W

hope of setting up winners for our side to king, queen, jack, ten, nine, eight and seven.

cash when we get the lead. But why do we That is, there are eight cards higher than the ™?

or the three of hearts? Does it matter them. If dummy has two of them and you Partner leads the seven of hearts, the five is

which small card you choose to lead? also have two, that accounts for seven cards played from dummy. What cards has de-

In one sense it probably and declarer can have only one card bigger clarer got?

doesn’t matter at all: any Try the Rule

of your three small hearts of Ele ven.

would do, provided you Partner has led

find partner with one or

hearts. But there is a ‘IT is time for me to take a break,’ says Sand Dummy has

six of hearts and that is fourteen years is long enough for anybody!’ er than the

because as a partnership We have to respect Sandra’s wishes, but hope seven, and so do

that she will come

you have agreed to lead back to English Bridge sooner rather than later. you. So declarer

Over the last fourteen

years, Sandra has been one of the biggest ‘nam

her column one of the most appreciated.

from the top when you heart higher

One of England and Great Britain’s greatest

lead a suit that does not champions, Sandra Landy’s contribu- than the seven.

tion to bridge goes well beyond boosting the

have a good honour nation’s medals cabinet. After retir- Partner must

ing early from her lectureship in Computer

sequence. Studies at Brighton University, she have ™A-J-10-7

worked for the EBU to develop Bridge for

trying to beat declarer’s write material. I am delighted that the well. You should

courses we created are still in use and the book

contract. Or if it can’t be s I wrote are still being read.’ play your heart

beaten, you must do after retiring from Bridge for All. Her two or heart

your best to minimise approach that characterise her books. nine, and your

Readers have been most appreciative of her

being patronising, and we have all benefited

that declarer makes. from her sage bridge (and, often, the trick! If you

editorial) counsel. We will miss you, dear Sand

Every card you play ra, but while this is definitively a fond play your king

farewell, it is not, we very much hope, a final

carries some sort of goodbye! of hearts declarer

message. Your partner will have a heart

can ignore that message stopper.