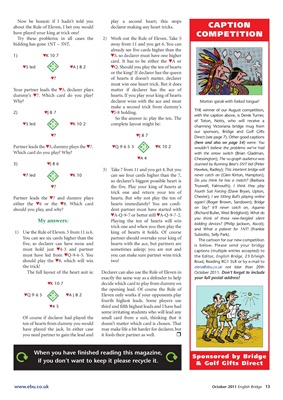 Now be honest: if I hadn’t told you play a second heart; this stops

about the Rule of Eleven, I bet you would declarer making any heart tricks. CAPTION

have played your king at trick one!

Try these problems; in all cases the 2) Work out the Rule of Eleven. Take 5

card. It has to be either the ™A or

or the king? If declarer has the queen

™? of hearts it doesn’t matter, declarer

must win one heart trick. But it does

Your partner leads the ™5, declarer plays matter if declarer has the ace of

dummy’s ™7. Which card do you play? hearts. If you play your king of hearts

Why? declarer wins with the ace and must Morton speak with forked tongue!

make a second trick from dummy’s

THE winner of our August competition,

with the caption above, is Derek Turner,

So the answer is: play the ten. The

N of Toton, Notts, who will receive a

our sponsors, Bridge and Golf Gifts

Which card do you play? Why? with the arrow switch (Brian Gladman,

™A 4 Chessington); The vu-graph audience was

so declarer’s biggest possible heart is Do you think he has a match? (Barbara

™? the five. Play your king of hearts at Truswell, Falmouth); I think they play

trick one and return your ten of Fourth Suit Forcing (Dave Bryan, Upton,

Partner leads the ™7 and dummy plays hearts. But why not play the ten of Chester); I see Sitting Bull's playing online

either the ™6 or the ™8. Which card hearts immediately? You are confi- again! (Roger Brown, Sandown); Bridge

should you play, and why? dent partner must have started with

(Richard Buller, West Bridgford); What do

you think of these new-fangled silent

My answers: Playing the ten of hearts will win

trick one and when you then play the

and What a palaver for 1NT! (Frankie

five, so declarer can have none and hearts with the ace, but partners are is below. Please send your bridgy

must hold just ™4-3 and partner sometimes asleep; you are not and captions (multiple entries accepted) to

must have led from ™Q-9-6-5. You you can make sure partner wins trick the Editor, English Bridge, 23 Erleigh

should play the ™8, which will win two! Road, Reading RG1 5LR or by e-mail to

the trick! elena@ebu.co.uk not later than 20th

The full layout of the heart suit is: Declarer can also use the Rule of Eleven in October 2011. Don’t forget to include

exactly the same way as a defender to help your full postal address!

™K 10 7 decide which card to play from dummy on

the opening lead. Of course the Rule of

fourth highest leads. Some players use

™4 3 third and fifth highest leads and I have had

some irritating students who will lead any

Of course if declarer had played the small card from a suit, thinking that it

ten of hearts from dummy you would doesn’t matter which card is chosen. That

have played the jack. In either case may make life a bit harder for declarer, but

you need partner to gain the lead and it fools their partner as well. r

When you have finished reading this magazine,

if you don’t want to keep it please recycle it. & Golf Gifts Direct