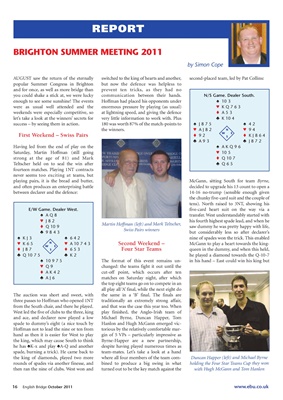 AUGUST saw the return of the eternally switched to the king of hearts and another, second-placed team, led by Pat Collins:

and for once, as well as more bridge than pre vent ten tricks, as they had no

you could shake a stick at, we were lucky com munication between their hands. N/S Game. Dealer South.

enough to see some sunshine! The events Hoffman had placed his opponents under ´ 10 3

weekends were especially competitive, so at lightning speed, and giving the defence t A53

let’s take a look at the winners’ secrets for very little information to work with. Plus ® K 10 4

Having led from the end of play on the ´ AKQ96

Teltscher held on to seal the win after ® Q65

never seems too exciting at teams, but

playing pairs, it is the bread and butter, McGann, sitting South for team Byrne,

between declarer and the defence: 14-16 no-trump (sensible enough given

the chunky five-card suit and the couple of

E/W Game. Dealer West. five-card heart suit on the way via a

™ J82 his fourth highest spade lead, and when he

® 9843 but considerably less so after declarer’s

™ Q9 changed: the teams fight it out until the

® AJ6 matches on Saturday night, after which

the top eight teams go on to compete in an

all play all ‘A’ final, while the next eight do

The auction was short and sweet, with the same in a ‘B’ final. The finals are

from the South chair, and there he played. and that was the case this year too. When

West led the five of clubs to the three, king play finished, the Anglo-Irish team of

the king, which may cause South to think Byrne-Happer are a new partnership,

spade, burning a trick). He came back to team-mates. Let’s take a look at a hand

the king of diamonds, played two more where all four members of the team com- Duncan Happer (left) and Michael Byrne

rounds of spades via another finesse, and bined to produce a big swing in what holding the Four Star Teams Cup they won

then ran the nine of clubs. West won and turned out to be the key match against the with Hugh McGann and Tom Hanlon