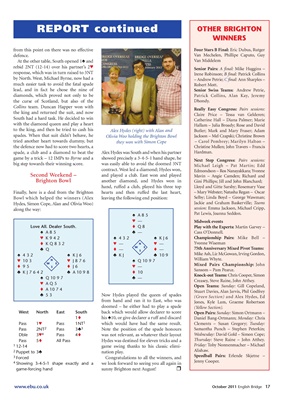 from this point on there was no effective Four Stars B Final: Eric Dubus, Rutger

At the other table, South opened 1´ and Van Middelem

response, which was in turn raised to 3NT Irene Robinson; B final: Patrick Collins

much easier task to avoid the fatal spade Robert Mott.

lead, and in fact he chose the nine of Senior Swiss Teams: Andrew Petrie,

diamonds, which proved not only to be Patrick Collins, Alan Kay, Jeremy

the curse of Scotland, but also of the Dhondy.

the king and returned the suit, and now Claire Price – Tessa van Gelderen;

with the diamond queen and play a heart Hallam – Julia Broady; Rose and David

to the king, and then he tried to cash his Alex Hydes (right) with Alan and Butler; Mark and Mary Fraser; Adam

tried another heart towards dummy, but they won with Simon Cope – Carol Pembrey; Marilyn Halton –

spade, a club and a diamond to beat the Alex Hydes was South and when his partner Hardman.

game by a trick – 12 IMPs to Byrne and a showed precisely a 3-4-5-1 hand shape, he Next Step Congress: Pairs sessions:

Finally, here is a deal from the Brighton hearts and then ruffed the last heart, – Mary Webster; Natasha Regan – Oscar

from hand and ran it to East, who was Jones, Kyle Lam, Graeme Robertson

doomed – he either had to play a spade (Yellow Section).

1t his ´10, or give declarer a ruff and discard Daniel Bang-Ortmann; Monday: Chris

Pass 1™ Pass 1NT1 which would have had the same result. Clements – Susan Gregory; Tuesday:

Dble 3™4 Pass 4t was not relevant, as whatever their layout Wednesday: David Gold – Simon Cope;

3 Forced Congratulations to all the winners, and Speedball Pairs: Erlende Skjetne –

we look forward to seeing you all again in