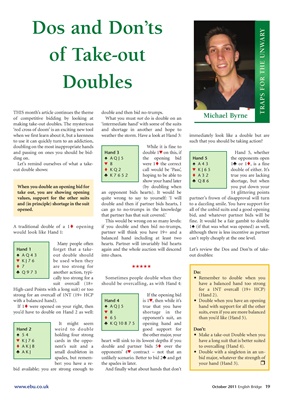 THIS month’s article continues the theme double and then bid no-trumps.

making take-out doubles. The mysterious ‘intermediate hand’ with some of the suits

when we first learn about it, but a keenness weather the storm. Have a look at Hand 3: immediately look like a double but are

to use it can quickly turn to an addiction, such that you should be taking action?

doubling on the most inappropriate hands While it is fine to

and passing on ones you should be bid- Hand 3 double 1™ on this, if Hand 5, whether

ding on. ´ AQJ5 the opening bid Hand 5 the opponents open

show your hand later ® Q86 shortage, but when

take out, you are showing opening an opponent bids hearts). It would be 14 glittering points

values, support for the other suits quite wrong to say to yourself: ‘I will partner’s frown of disapproval will turn

and (in principle) shortage in the suit double and then if partner bids hearts, I to a dazzling smile. You have support for

opened. can go to no-trumps in the knowledge all of the unbid suits and a good opening

that partner has that suit covered.’ bid, and whatever partner bids will be

This would be wrong on so many levels: fine. It would be a fair gambit to double

A traditional double of a 1t opening if you double and then bid no-trumps, 1´ (if that was what was opened) as well,

would look like Hand 1: partner will think you have 19+ and a although there is less incentive as partner

balanced hand including at least two can't reply cheaply at the one level.

´ AQ43 out double should into chaos. out doubles:

t 7 are too strong for HHHHH

suit overcall (18+ should be overcalling, as with Hand 4: have a balanced hand too strong

with a balanced hand). Hand 4 is 1™, then while it’s • Double when you have an opening

If 1t were opened on your right, then ´ AQJ5 true that you have hand with support for all the other

you’d have to double on Hand 2 as well: ™ 8 shortage in the suits, even if you are more balanced

´ 54 holding four strong the other major, your • Make a take-out Double when you

t AKJ8 nent’s suit and a double and partner bids 5t over the to overcalling (Hand 4).

spades, but remem- unlikely scenario. Better to bid 2® and get bid major, whatever the strength of

bid available; you are strong enough to And finally what about hands that don’t