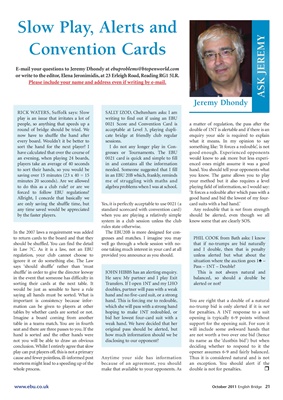 people, so anything that speeds up a 0021 Score and Convention Card is a matter of regulation, the pass after the

round of bridge should be tried. We acceptable at Level 3, playing dupli- double of 1NT is alertable and if there is an

every board. Wouldn’t it be better to sessions. what it means. In my opinion to say

sort the hand for the next player? I I do not any longer play in Con- something like: ‘It forces a redouble’, is not

have calculated that over the course of gresses or Tournaments. The EBU good enough. Experienced opponents

an evening, when playing 24 boards, 0021 card is quick and simple to fill would know to ask more but less experi-

to sort their hands, so you would be needed. Someone suggested that I fill hand. You should tell your opponents what

minutes 20 seconds). Are we allowed me of struggling with maths and your method but it also requires a level

to do this as a club rule? or are we algebra problems when I was at school. playing field of information, so I would say:

forced to follow EBU regulations? ‘It forces a redouble after which pass with a

Allright, I concede that basically we good hand and bid the lowest of my four-

are only saving the shuffle time, but Yes, it is perfectly acceptable to use 0021 (a card suits with a bad hand.’

by the faster players. when you are playing a relatively simple should be alerted, even though we all

system in a club session unless the club know some that are clearly SOS.

to return cards to the board and that they gresses and matches. I imagine you may PHIL COOK from Bath asks: I know

should be shuffled. You can find the detail well go through a whole session with no- that if no-trumps are bid naturally

in Law 7C. As it is a law, not an EBU one taking much interest in your card at all and I double, then that is penalty

regulation, your club cannot choose to provided you announce as you should. unless alerted but what about the

ignore it or do something else. The Law situation where the auction goes 1´ –

says ‘should shuffle’ rather than ‘must Pass – 1NT – Double?

shuffle’ in order to give the director leeway JOHN HIBBS has an alerting enquiry. This is not always natural and

in the event that someone has difficulty in He says: My partner and I play Exit balanced, so should a double be

sorting their cards at the next table. It Transfers. If I open 1NT and my LHO alerted or not?

would be just as sensible to have a rule doubles, partner will pass with a weak

saying all hands must be sorted. What is hand and no five-card suit, or a strong

important is consistency because infor- hand. This is forcing me to redouble, You are right that a double of a natural

tables by whether cards are sorted or not. hoping to make 1NT redoubled, or for penalties. A 1NT response to a suit

table in a teams match. You are in fourth weak hand. We have decided that her support for the opening suit. For sure it

seat and there are three passes to you. If the original pass should be alerted, but will include some awkward hands that

not you will be able to draw an obvious disclosing to our opponent? its name as the ‘dustbin bid’) but when

conclusion. Whilst I entirely agree that slow deciding whether to respond to it the

play can put players off, this is not a primary opener assumes 6-9 and fairly balanced.

cause and fewer pointless, ill-informed post Anytime your side has information Thus it is considered natural and is not

mortems might lead to a speeding up of the because of an agreement, you should an exception. You should alert if the

whole process. make that available to your opponents. As double is not for penalties. r