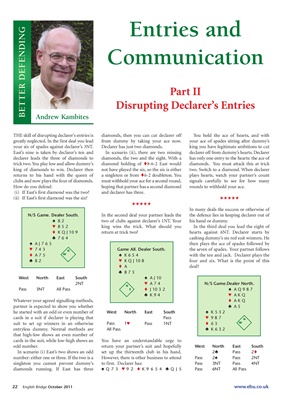 THE skill of disrupting declarer's entries is diamonds, then you can cut declarer off You hold the ace of hearts, and with

greatly neglected. In the first deal you lead from dummy by taking your ace now. your ace of spades sitting after dummy’s

your six of spades against declarer’s 3NT. Declarer has just two diamonds. king you have legitimate ambitions to cut

East’s nine is taken by declarer’s ten and In scenario (ii), there are two missing declarer off from dummy’s hearts. Declarer

declarer leads the three of diamonds to diamonds, the two and the eight. With a has only one entry to the hearts: the ace of

trick two. You play low and allow dummy’s diamond holding of t8-6-2 East would diamonds. You must attack this at trick

king of diamonds to win. Declarer then not have played the six, so the six is either two. Switch to a diamond. When declarer

returns to his hand with the queen of a singleton or from t6-2 doubleton. You plays hearts, watch your partner’s count

clubs and now plays the four of diamonds. must withhold your ace for a second round, signals carefully to see for how many

How do you defend: hoping that partner has a second diamond rounds to withhold your ace.

(i) If East’s first diamond was the two? and declarer has three.

(ii) If East’s first diamond was the six? HHHHH

In many deals the success or otherwise of

N/S Game. Dealer South. In the second deal your partner leads the the defence lies in keeping declarer out of

´ 82 two of clubs against declarer’s 1NT. Your his hand or dummy.

™ 852 king wins the trick. What should you In the third deal you lead the eight of

´ AJ765 then plays the ace of spades followed by

™ 743 N Game All. Dealer South. the seven of spades. Your partner follows

partner is expected to show you whether ® A5

that high-low shows an even number of

cards in the suit, while low-high shows an You have an understandable urge to

In scenario (i) East’s two shows an odd set up the thirteenth club in his hand. 2® Pass 2t

number: either one or three. If the two is a However, there is other business to attend Pass 2´ Pass 2NT