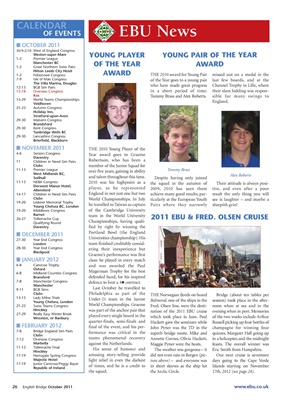 7-9 Isle of Man Congress of the Year goes to a young pair last few boards, and at the

who have made great progress Channel Trophy in Lille, where

13-18 Overseas Congress in a short period of time: their slam bidding was respon-

Kos Tommy Brass and Alex Roberts. sible for many swings to

11 Children in Need Sim Pairs Robertson, who has been a

Clubs member of the Junior Squad for

Solihull and talent throughout this time. Despite having only joined

14-17 Children in Need Sim Pairs England in not just one but two achieve many good results, par- result the only thing you will

Clubs World Championships. In July ticularly at the European Youth see is laughter – and maybe a

Young Chelsea BC, London he travelled to Taiwan as captain Pairs where they narrowly sheepish grin!

19-20 Middlesex Congress of the Cambridge University

Barnet team in the World University

Daventry fied by right by winning the

n JANUARY 2012 class: he played in every match

6-8 Camrose Trophy and was awarded the Paul

Bransford defended hand, for his inspired

Young Chelsea, London Balmoral, one of the ships in the session) took place in the after-

21-22 Swiss Teams Congress World Championships. Graeme Fred. Olsen line, were the desti- noon when at sea and in the

Hinckley was part of the anchor pair that nation of the 2011 EBU cruise evening when in port. Memories

played every single board in the which took place in June. Paul of the two weeks include Arthur

quarter-finals, semi-finals and Hackett gave the seminars while Russell picking up four bottles of

n FEBRUARY 2012 final of the event, and his per- John Pyner was the TD in the champagne for winning four

7-8 Bridge England Sim Pairs formance was critical in the

Marbella against the Netherlands. Maggie Pyner were the hosts. feasts. The overall winner was

His sense of humour and The weather was gorgeous – it Eric Smith from Hampshire.

of times, and he is a credit to in short sleeves as the ship hit Islands starting on November