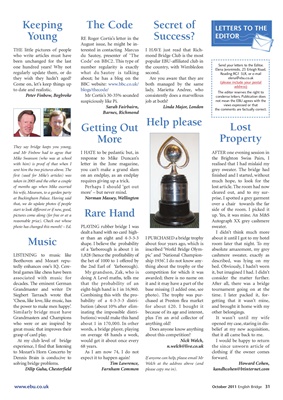 Keeping The Code Secret of LETTERS TO THE

Young RE Roger Cortis’s letter in the Success? EDITOR

who write articles must have du Sautoy, presenter of ‘The mond Bridge Club is the most

been unchanged for the last Code’ on BBC2. This type of popular EBU-affiliated club in

one hundred years! Why not number regularity is exactly the country, with Wimbledon Send your letters to the Editor,

regularly update them, or do what du Sautoy is talking second. Reading RG1 5LR, or e-mail

they wish they hadn’t aged? about; he has a blog on the Are you aware that they are elena@ebu.co.uk

Come on, let’s keep things up BBC website: www.bbc.co.uk/ both managed by the same (please include your postal

to date and realistic. blogs/thecode/ lady, Marietta Andree, who The editor reserves the right to

suspiciously like Pi. job at both? not mean the EBU agrees with the

views expressed or that

Getting Out Help please Lost

They say bridge keeps you young,

and Mr Finbow had to agree that I HATE to be pedantic but, in AFTER one evening session in

Mike Swanson (who was at school response to Mike Duncan’s the Brighton Swiss Pairs, I

with him) is proof of that when I letter in the June magazine, realised that I had mislaid my

sent him the two pictures above. The you can’t make a grand slam grey sweater. The bridge had

first (used for Mike’s articles) was on an endplay, as an endplay finished and I started, without

taken in 2005 and the other a couple requires giving up a trick. much hope, to look for the

of months ago when Mike escorted Perhaps I should ‘get out lost article. The room had now

his wife, Maureen, to a garden party more’ – but never mind. cleared out, and to my sur-

that, we do update photos if people over a chair towards the far

start to look different or if new, good, side of the room. I picked it

pictures come along (for free or at a Rare Hand up. Yes, it was mine. An M&S

photo has changed this month! – Ed. PLAYING rubber bridge I was sweater.

Music shape. I believe the probability about four years ago, which is room later that night. To my

of a Yarborough is about 1 in inscribed ‘World Bridge Olym- absolute amazement, my grey

LISTENING to music like 1,828 (hence the profitability of pic’ and ‘National Champion- cashmere sweater, exactly as

tedly enhances one’s IQ. Cere- the 2nd Earl of Yarborough). thing about the trophy or the bed. Obviously, I hadn’t worn

bral games like chess have been My grandson, Zak, who is competition for which it was it, but imagined I had. I didn’t

associated with music for doing A Level maths, tells me awarded; there is no name on consider the matter further.

decades. The eminent German that the probability of an it and it may have a part of the After all, there was a bridge

Grandmaster and writer Dr eight-high hand is 1 in 16,960. base missing (I added one, see tournament going on at the

Siegbert Tarrasch wrote that Combining this with the pro- photo). The trophy was pur- time. I later packed it, for-

‘Chess, like love, like music, has bability of a 4-3-3-3 distri- chased at Preston flea market getting that it wasn’t mine,

the power to make men happy’. bution (about 10% after elim- for about £20. I bought it and brought it home with my

Similarly bridge must have inating the impossible distri- because of its age and interest, other belongings.

great music that improves their words, a bridge player, playing Does anyone know anything belief at my new acquisition,

grasp of card play. on average 48 hands a week, about this competition? that it all came back to me.

At my club level of bridge would get it about once every Nick Welch, I would be happy to return

experience, I find that listening 68 years. n.welch@live.co.uk the since unworn article of

to Mozart’s Horn Concerto by As I am now 74, I do not clothing if the owner comes

Dennis Brain is conducive to expect it to happen again! If anyone can help, please email Mr forward.

solving bridge problems. Tim Lawrence, Welch at the address above (and Howard Cohen,