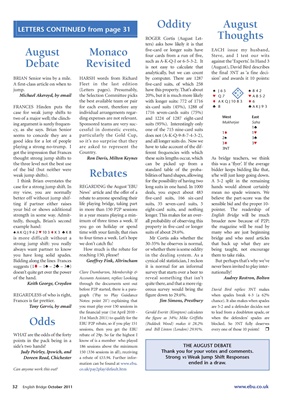 ters) asks how likely it is that

four cards from a run of five,

EACH issue my husband,

Steve, and I test our wits

is not easy to calculate that

against the ‘Experts’. In Hand 3

analytically, but we can count the final 3NT as ‘a fine deci-

BRIAN Senior wins by a mile. HARSH words from Richard by computer. There are 1287 sion’ and awards it 10 points:

A first-class article on when to Fleet in the last edition five-card suits, of which 258

Michael Akeroyd, by email the Selection Committee picks 20%, but it is much more likely ™ Q7 S

two of a major well; the clinch- ding expenses are not relevant. and 1224 of 1287 eight-card West East

cy, as she says. Brian Senior cess ful in domestic events, one of the 715 nine-card suits

good idea for a lot of people so it’s no surprise that they and all longer suits do. Now we 3t 3™

playing a strong no-trump. I are asked to represent the have to take account of the dif- 3NT

got the impression that Frances Country. ferent frequencies with which

the three level not the best use can be picked up from a this was a ‘flyer’. If the average

of the bid (but neither were standard table of the proba- bidder keeps bidding like that,

case for a strong jump shift. In REGARDING the August ‘EBU long suits in one hand. In 1000 hands would almost certainly

my view, you are normally News’ article and the offer of a deals, you expect about 483 mean no spade winners. We

better off without jump shif- rebate to anyone spending their five-card suits, 166 six-card believe the part-score was the

your bid or shows additional in more than 150 P2P sessions eight-card suits, and nothing pointer. The readership of

strength in some way. Admit- in a year means playing a min- longer. This makes for an over- English Bridge will be much

tedly, though, Brian’s second imum of three times a week. If all probability of observing this broader now because of P2P;

example hand: you go on holiday or spend property in five-card or longer the magazine will be read by

is more difficult without a to four times a week. Let’s hope Mr Cortis asks whether the bridge and who need articles

strong jump shift: you really we don’t catch flu! 30-35% he observes is normal, that back up what they are

always want partner to know How much is the rebate for or whether there is some oddity being taught, not encourage

you have long solid spades. reaching 150, please? in the dealing system. As a them to take risks.

doesn’t quite get over the power Clare Dumbarton, Membership & survey that starts over a beer to nationally!

Keith George, Croydon through the documents sent out quite there, and that a more rig-

before P2P started, there is a para- orous survey would bring the David Bird replies: 3NT makes

Tony Gervis, by email you must play over 150 sessions in are 5-2 and a defender decides not

the financial year (1st April 2010 - Gerald Everitt (Kimpton) calculates to lead from a doubleton spade, or

31st March 2011) to qualify for the the figure as 34%; Mike Griffiths when the defenders’ spades are

sessions, then you get the EBU

every one of those 10 points! r

WHAT are the odds of the forty rebate of 29p. So far the highest I

side’s two hands? 186 sessions above the minimum THE AUGUST DEBATE

Judy Poirley, Ipswich, and 150 (336 sessions in all), receiving Thank you for your votes and comments.

mation can be found at www.ebu. ended in a draw.

Can anyone work this out? co.uk/pay2play/default.htm