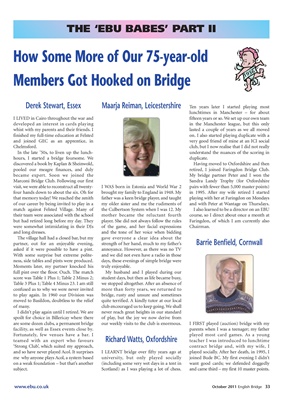 How Some More of Our 75-year-old

Members Got Hooked on Bridge

lunchtimes in Manchester – for about

I LIVED in Cairo throughout the war and fifteen years or so. We set up our own team

developed an interest in cards playing in the Manchester league, but this only

whist with my parents and their friends. I lasted a couple of years as we all moved

finished my full-time education at Felsted on. I also started playing duplicate with a

and joined GEC as an apprentice, in very good friend of mine at an ICI social

Chelmsford. club, but I now realise that I did not really

In the late ’50s, to liven up the lunch- understand the nuances of the scoring in

hours, I started a bridge foursome. We duplicate.

discovered a book by Kaplan & Sheinwold, Having moved to Oxfordshire and then

became expert. Soon we joined the My bridge partner Peter and I won the

visit, we were able to reconstruct all twenty- I WAS born in Estonia and World War 2 pairs with fewer than 5,000 master points)

four hands down to about the six. Oh for brought my family to England in 1948. My in 1995. After my wife retired I started

that memory today! We reached the zenith father was a keen bridge player, and taught playing with her at Faringdon on Mondays

of our career by being invited to play in a my older sister and me the rudiments of and with Peter at Wantage on Thursdays.

match against Felsted Village. Many of the Culbertson System when I was 12. My I also learned to be a director on an EBU

their team were associated with the school mother became the reluctant fourth course, so I direct about once a month at

but had retired long before my day. They player. She did not always follow the rules Faringdon, of which I am currently also

were somewhat intimidating in their DJs of the game, and her facial expressions Chairman.

and long dresses. and the tone of her voice when bidding

The village hall had a closed bar, but my gave everyone a clear idea about the

partner, out for an enjoyable evening, strength of her hand, much to my father’s Barrie Benfield, Cornwall

asked if it were possible to have a pint. annoyance. However, as there was no TV

ness, side tables and pints were produced. days, these evenings of simple bridge were

full pint over the floor. Ouch. The match My husband and I played during our

score was Table 1 Plus 1; Table 2 Minus 2; student days, but then as life became busy,

Table 3 Plus 1; Table 4 Minus 23. I am still we stopped altogether. After an absence of

confused as to why we were never invited more than forty years, we returned to

to play again. In 1960 our Division was bridge, rusty and unsure and sometimes

moved to Basildon, doubtless to the relief quite terrified. A kindly tutor at our local

of many. club encouraged us to keep going. We shall

I didn’t play again until I retired. We are never reach great heights in our standard

spoilt for choice in Billericay where there of play, but the joy we now derive from

are some dozen clubs, a permanent bridge our weekly visits to the club is enormous. I FIRST played (auction) bridge with my

facility, as well as Essex events close by. parents when I was a teenager; my father

Fortunately, few venues have a bar. I played most card games. As a young

teamed with an expert who favours Richard Watts, Oxfordshire teacher I was introduced to lunchtime

‘Strong Club’, which suited my approach, contract bridge and, with my wife, I

and so have never played Acol. It surprises I LEARNT bridge over fifty years ago at played socially. After her death, in 1995, I

me why anyone plays Acol, a system based university, but only played socially joined Bude BC. My first evening I didn’t

on a weak foundation – but that’s another (including some very wet days in a tent in want good cards; we defended doggedly

subject. Scotland) as I was playing a lot of chess. and came third – my first 10 master points.