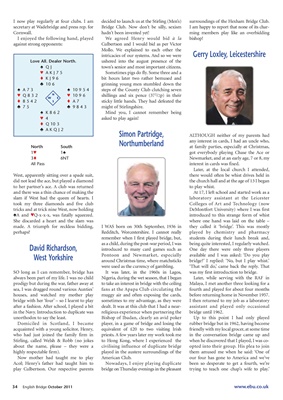 I now play regularly at four clubs. I am decided to launch us at the Stirling (Men’s) surroundings of the Hexham Bridge Club.

secretary at Wadebridge and press rep. for Bridge Club. Now don’t be silly, sexism I am happy to report that none of its char-

Cornwall. hadn’t been invented yet! ming members play like an overbidding

against strong opponents: Culbertson and I would bid as per Victor

Mollo. We explained to each other the

intricacies of our systems. And so we were Gerry Loxley, Leicestershire

Love All. Dealer North. ushered into the august presence of the

™ AKJ75 Sometimes pigs do fly. Some three and a

® 10 6 grinning young men stumbled down the

´ K862 Mind you, I cannot remember being

Simon Partridge, ALTHOUGH neither of my parents had

any interest in cards, I had an uncle who,

1™ 1´ got everybody playing Chase the Ace or

All Pass interest in cards was fixed.

Later, at the local church I attended,

West, apparently sitting over a spade suit, there would often be whist drives held in

did not lead the ace, but played a diamond the church hall and at the age of 13 I began

to her partner’s ace. A club was returned to play whist.

and there was a thin chance of making the At 17, I left school and started work as a

slam if West had the queen of hearts. I laboratory assistant at the Leicester

tricks and at trick nine West, now holding DeMontfort University) where I was first

´A and ™Q-x-x-x, was fatally squeezed. introduced to this strange form of whist

made. A triumph for reckless bidding, I WAS born on 30th September, 1936 in they called it ‘bridge’. This was mostly

remember when I first played bridge, but, students during their lunch break and,

as a child, during the post-war period, I was being quite interested, I regularly watched.

David Richardson, introduced to many card games such as One day there were only three players

Pontoon and Newmarket, especially available and I was asked: ‘Do you play

West Yorkshire around Christmas time, where matchsticks bridge?’ I replied: ‘No, but I play whist.’

were used as the currency of gambling. ‘That will do,’ came back the reply. That

SO long as I can remember, bridge has It was later, in the 1960s in Lagos, was my first introduction to bridge.

always been part of my life. I was no child Nigeria, during the wet season, that I began Later, while serving with the RAF in

prodigy but during the war, father away at to take an interest in bridge with the ceiling Malaya, I met another three looking for a

sea, I was dragged round various Aunties’ fans at the Apapa Club circu lating the fourth and played for about four months

houses, and watched my mother play muggy air and often exposing the cards, before returning home in November 1957.

bridge with her ‘four’ – so I learnt to play sometimes to my advantage, as they were I then returned to my job as a laboratory

after a fashion. After school, I played a bit dealt. It was at this club that I had a near- assistant and played only occasional

in the Navy. Introduction to duplicate was religious experience when partnering the bridge until 1962.

unorthodox to say the least. Bishop of Ibadan, clearly an avid poker Up to this point I had only played

Domiciled in Scotland, I became player, in a game of bridge and losing the rubber bridge but in 1962, having become

acquainted with a young solicitor, Henry, equivalent of £20 to two visiting Irish friendly with my local grocer, at some time

who had just joined the family firm in priests. A few years later my work took me in the conversation bridge came up and

Stirling, called Welsh & Robb (no jokes to Hong Kong, where I experienced the when he discovered that I played, I was co-

about the name, please – they were a civil ising influence of duplicate bridge opted into their group. His plea to join

highly respectable firm). played in the austere surroundings of the them amused me when he said: ‘One of

Now mother had taught me to play American Club. our four has gone to America and we’ve

Acol; Henry’s father had taught him to Nowadays, I enjoy playing duplicate been so desperate to get a fourth, we’re

play Culbertson. Our respective parents bridge on Thursday evenings in the pleasant trying to teach one chap’s wife to play.’