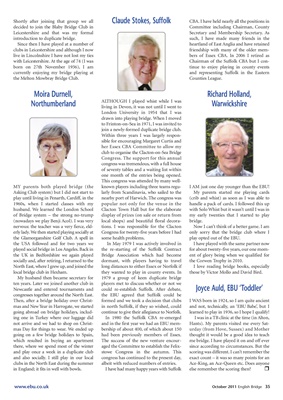 Shortly after joining that group we all Claude Stokes, Suffolk CBA. I have held nearly all the positions in

decided to join the Blaby Bridge Club in Committee including Chairman, County

Leicestershire and that was my formal Secretary and Membership Secretary. As

introduction to duplicate bridge. such, I have made many friends in the

live in Lincolnshire I have not lost my ties bers of Essex CBA. In 2006 I retired as

with Leicestershire. At the age of 74 (I was Chairman of the Suffolk CBA but I con-

born on 27th November 1936), I am tinue to enjoy playing in county events

ALTHOUGH I played whist while I was

Northumberland living in Devon, it was not until I went to Warwickshire

London University in 1954 that I was

drawn into playing bridge. When I moved

Within three years I was largely respon-

sible for encouraging Margaret Curtis and

her Essex CBA Committee to allow my

club to organise the Clacton-on-Sea Bridge

Congress. The support for this annual

congress was tremendous, with a full house

one month of the entries being opened.

This congress was attended by many well-

MY parents both played bridge (the known players including three teams regu- I AM just one day younger than the EBU!

Asking Club system) but I did not start to larly from Scandinavia, who sailed to the My parents started me playing cards

play until living in Penarth, Cardiff, in the nearby port of Harwich. The congress was (crib and whist) as soon as I was able to

1960s, when I started classes with my popular not only for the venue in the handle a pack of cards. I followed this up

husband. We learned the London School Clacton Town Hall but for the elaborate with Solo Whist but it wasn’t until I was in

nervous: the teacher was a very fierce, eld- tions. I was responsible for the Clacton Now I can’t think of a better game. I am

erly lady. We then started playing socially at Congress for twenty-five years before I had only sorry that the bridge club where I

the Glamorganshire Golf Club. A spell in some health problems. play opted out of the EBU.

played social bridge in Los Angeles. Back in the re-starting of the Suffolk Contract for about twenty-five years, our one mom-

socially and, after retiring, I returned to the dormant, with players having to travel the Corwen Trophy in 2010.

North East, where I grew up, and joined the long distances to either Essex or Norfolk if I love reading bridge books, especially

local bridge club in Hexham. they wanted to play in county events. In those by Victor Mollo and David Bird.

ten years. Later we joined another club in players met to discuss whether or not we

congresses together around the North East. the EBU agreed that Suffolk could be

Then, after a bridge holiday over Christ- formed and we took a decision that clubs I WAS born in 1924, so I am quite ancient

mas and New Year in Harrogate, we started in north Suffolk, if they so wished, could and not, technically, an ‘EBU Babe’, but I

going abroad on bridge holidays, includ- continue to give their allegiance to Norfolk. learned to play in 1936, so I hope I qualify!

ing one in Turkey where our luggage did In 1980 the Suffolk CBA re-emerged I was in a TB clinic at the time (in Alton,

not arrive and we had to shop on Christ- and in the first year we had an EBU mem- Hants). My parents visited me every Sat-

mas Day for things to wear. We ended up bership of about 400, of which about 150 urday (from Hove, Sussex) and Mother

going on a few bridge holidays to Spain, had been previously members of Essex. thought it would be a good idea to teach

which resulted in buying an apartment The success of the new venture encour- me bridge. I have played it on and off ever

there, where we spend most of the winter aged the Committee to establish the Felix- since according to circumstances. But the

and play once a week in a duplicate club stowe Congress in the autumn. This scoring was different. I can’t remember the

and also socially. I still play in our local congress has continued to the present day, exact count – it was so many points for an

clubs in the North East during the summer albeit with reduced numbers of entries. Ace-King, an Ace-Queen etc. Does anyone

in England; it fits in well with bowls. I have had many happy years with Suffolk else remember the scoring then? r