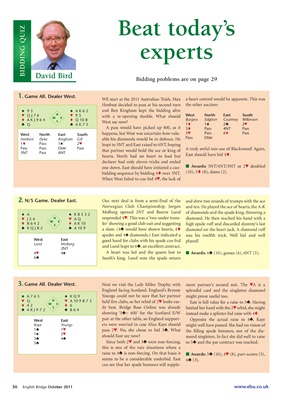 1. Game All. Dealer West. WE start at the 2011 Australian Trials. Max a heart control would be apparent. This was

Henbest decided to pass at his second turn the other auction:

W E with a re-opening double. What should

Henbest Dyke Kingham Gill able his diamonds would be in defence. He Pass Dble

that partner would hold the ace or king of

hearts. North had no heart to lead but East should have bid 4t.

declarer had only eleven tricks and ended

one down. East should have initiated a cue- n Awards: 5NT/4NT/3NT or 2™ doubled

When West failed to cue-bid 4™, the lack of

2. N/S Game. Dealer East. Our next deal is from a semi-final of the and drew two rounds of trumps with the ace

Norwegian Club Championship. Jørgen and ten. He played the ace of hearts, the A-K

Molberg opened 2NT and Boerre Lund of diamonds and the spade king, throwing a

spades and 4´ diamonds.) East indicated a was his twelfth trick. Well bid and well

and Lund leapt to 6®, an excellent contract.

3. Game All. Dealer West. Next we visit the Lady Milne Trophy, with ment partner’s second suit. The ™A is a

´ A763 ´ KQ9 Youngs could not be sure that her partner might prove useful too.

S ily best. Bridge Base Online was already limited her hand with the 2™ rebid, she might

West East pair at the other table, so England support- Opposite the actual raise to 4®, Kaye

Kaye Youngs ers were worried in case Alice Kaye should might well have passed. She had no vision of

should East say now? mond singleton. In fact she did well to raise

this is one of the rare situations where a

can see that her spade honours will supple-