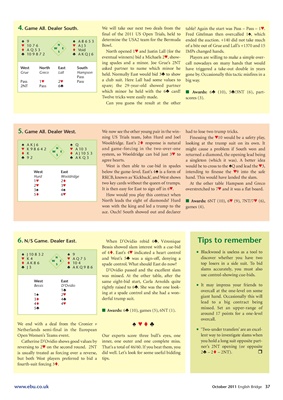 4. Game All. Dealer South. We will take our next two deals from the table? Again the start was Pass – Pass – 1™.

final of the 2011 US Open Trials, held to Fred Gitelman then overcalled 1´, which

eventual winners) bid a Michaels 2™, show- Players are willing to make a simple over-

ing spades and a minor. Joe Grue’s 2NT call nowadays on many hands that would

Grue Greco Lall Hampson held. Normally East would bid 3® to show gone by. Occasionally this tactic misfires in a

Twelve tricks were easily made. scores (3).

Can you guess the result at the other

5. Game All. Dealer West. We now see the other young pair in the win- had to lose two trump tricks.

ning US Trials team, John Hurd and Joel Finessing the ™10 would be a safety play,

´ AKJ6 ´ Q Wooldridge. East’s 2t response is natural looking at the trump suit on its own. It

agree hearts. a singleton (which it was). A better idea

West is then able to cue-bid in spades would be to cross to the ´Q and lead the ™3,

West East below the game-level. East’s 4´ is a form of intending to finesse the ™9 into the safe

Hurd Wooldridge RKCB, known as ‘Kickback’, and West shows hand. This would have landed the slam.

two key cards without the queen of trumps. At the other table Hampson and Greco

5t 6™ How would you play this contract when

won with the king and led a trump to the games (4).

´ 9 of 4t. East’s 4™ indicated a heart control • Blackwood is useless as have two

D’Ovidio passed and the excellent slam slams accurately, you must also

was missed. At the other table, after the use control-showing cue-bids.

rightly raised to 6®. She was the one look- • It may at the one-levelfriends to

4t 4™ lead to a big contract being

5® missed. Set an upper-range of

around 17 points for a one-level

Netherlands semi-final in the European • ‘Two-underinvestigateare an excel-

Catherine D’Ovidio shows good values by inner, one outer and one complete miss. you hold a long suit opposite part-

is usually treated as forcing over a reverse, did well. Let’s look for some useful bidding 2® – 2t – 2NT). r

but both West players preferred to bid a tips.