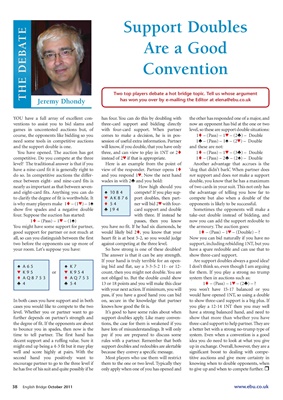 Jeremy Dhondy has won you over by e-mailing the Editor at elena@ebu.co.uk

YOU have a full array of excellent con- has four. You can do this by doubling with the other has responded one of a major, and

games in uncontested auctions but, of with four-card support. When partner level, so these are support double situations:

and the support double is one. will know, if you double, that you have only and these are not:

level? The traditional answer is that if you Here is an example from the point of Another advantage that accrues is the

have a nine-card fit it is generally right to view of the responder. Partner opens 1t ‘dog that didn’t bark’. When partner does

do so. In competitive auctions the differ- and you respond 1™. Now the next hand not support and does not make a support

ence between eight- and nine-card fits is wades in with 2® and you hold: double, you know that he has a maximum

nearly as important as that between seven- How high should you of two cards in your suit. This not only has

and eight-card fits. Anything you can do ´ 10 8 4 compete? If you play sup- the advantage of telling you how far to

to clarify the degree of fit is worthwhile. It ™ AK876 port doubles, then part- compete but also when a double of the

four. Suppose the auction has started: with three. If instead he take-out double instead of bidding, and

You might have some support for partner, you have no fit. If he had six diamonds, he the armoury. The auction goes:

all, so can you distinguish between the first heart fit is at best 5-2, so you would judge Now you can bid naturally if you have no

two before the opponents use up more of against competing at the three level. support, including rebidding 1NT, but you

your room. Let’s suppose you have: So how strong is one of these doubles? have a spare redouble and can use that to

The answer is that it can be any strength. show three-card support.

If your hand is truly terrible for an open- Are support doubles always a good idea?

t AQ8753 t AQ753 not obliged to. But the double could show system then in auctions such as:

with your next action. If minimum, you will you won’t have 15-17 balanced or you

pass, if you have a good hand you can bid would have opened 1NT, so using a double

In both cases you have support and in both on, secure in the knowledge that partner to show three-card support is a big plus. If

cases you would like to compete to the two knows how good the fit is. you play a 12-14 1NT then you may well

level. Whether you or partner want to go It’s good to have some rules about when have a strong balanced hand, and need to

further depends on partner’s strength and support doubles apply. Like many conven- show that more than whether you have

the degree of fit. If the opponents are about tions, the case for them is weakened if you three-card support to help partner. They are

to bounce you in spades, then now is the have lots of misunderstandings. It will only a better bet with a strong no-trump type of

time to tell partner. The first hand has pay if you are prepared to discuss some system. Even when a convention is a good

decent support and a ruffing value. Sure it rules with a partner. Remember that both idea you do need to look at what you give

might end up being a 4-3 fit but it may play support doubles and redoubles are alertable up in exchange. Overall, however, they are a

well and score highly at pairs. With the because they convey a specific message. significant boost to dealing with compe-

encourage partner to go to the three level if them to the one or two level. Typically they knowing when to double opponents, when

he has five of his suit and quite possibly if he only apply when one of you has opened and to give up and when to compete further. r