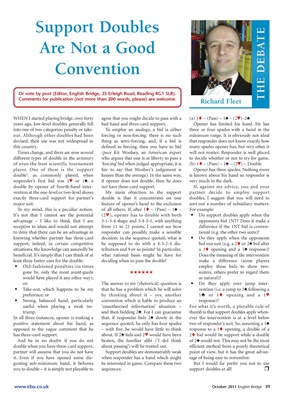 Are Not a Good

years ago, low-level doubles generally fell bad hand and three-card support. Opener has limited his hand. He has

into one of two categories: penalty or take- To employ an analogy, a bid is either three or four spades with a hand in the

out. Although other doubles had been forcing or non-forcing: there is no such minimum range. It is obviously not ideal

devised, their use was not widespread in thing as semi-forcing, and, if a bid is that responder does not know exactly how

this country. defined as forcing, then you have to bid many spades opener has, but very often it

Times change, and there are now several (pace Kit Woolsey, an American expert will not matter. Responder is well placed

different types of double in the armoury who argues that one is at liberty to pass a to decide whether or not to try for game.

player. One of these is the ‘support fair to say that Woolsey’s judgement is Opener has three spades. Nothing more

double’: as commonly played, when keener than the average). In the same way, is known about his hand so responder is

responder’s first bid was 1™ or 1´, a if opener does not double, then he does very much in the dark.

double by opener of fourth-hand inter- not have three-card support. If, against my advice, you and your

exactly three-card support for partner’s double is that it concentrates on one doubles, I suggest that you will need to

major suit. feature of opener’s hand to the exclusion sort out a number of subsidiary matters.

It’s not that I cannot see the potential (2™), opener has to double with both • Do support doubles apply when the

receptive to ideas and would not attempt from 11 to 21 points, I cannot see how difference if the 1NT bid is conven-

to deny that there can be an advantage in responder can possibly make a sensible tional (e.g. the other two suits)?

knowing whether partner has three-card decision: in the sequence quoted, what is • Do they apply when the opponents

situations, the knowledge can assuredly be tribution and 9 or so points? In particular, a 1t opening and a 1´ response)?

beneficial. It’s simply that I can think of at what rational basis might he have for Does the meaning of the intervention

least three better uses for the double: deciding when to pass the double? make a difference (some players

• Old-fashioned penalties (in times employ these bids to show two-

gone by, only the most avant-garde HHHHHH suiters, others prefer to regard them

would have played it any other way); as natural)?

or: The answer to my (rhetorical) question is • Do they apply over jump inter-

• Take-out, which happens to be my that he has a problem which he will solve vention (i.e. a jump to 2´ following a

• Strong, balanced hand, particularly convention which is liable to produce an response)?

useful when playing a weak no- ‘unauthorised information’ situation – For what it’s worth, a playable rule of

trump. and then bidding 2´. For I can guarantee thumb is that support doubles apply when-

In all three instances, opener is making a that, if responder bids 2´ slowly in the ever the intervention is at a level below

positive statement about his hand, as sequence quoted, he only has four spades two of responder’s suit. So, assuming a 1´

opposed to the vague comment that he – with five, he would have little to think response to a 1t opening, a double of a

has three-card support. about. If 2´ fails and 2™ would have been 2t bid would be support while a double

And be in no doubt: if you do not beaten, the familiar alibi (‘I did think of 2´ would not. This may not be the most

double when you have three-card support, about passing’) will be trotted out. efficient method from a purely theoretical

partner will assume that you do not have Support doubles are demonstrably weak point of view, but it has the great advan-

it. Even if you have opened some dis- when responder has a hand which might tage of being easy to remember.

gusting sub-minimum hand, it behoves be interested in game. Compare these two But I would far prefer you not to use

you to double – it is simply not playable to sequences: support doubles at all! r