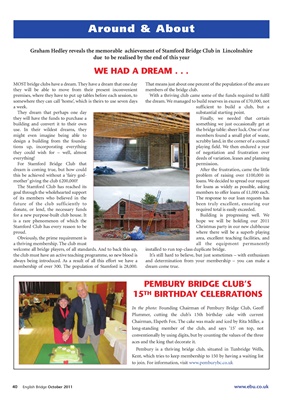 due to be realised by the end of this year

MOST bridge clubs have a dream. They have a dream that one day That means just about one percent of the population of the area are

they will be able to move from their present inconvenient members of the bridge club.

premises, where they have to put up tables before each session, to With a thriving club came some of the funds required to fulfil

somewhere they can call ‘home’, which is theirs to use seven days the dream. We managed to build reserves in excess of £70,000, not

a week. sufficient to build a club, but a

They dream that perhaps one day substantial starting point.

they will have the funds to purchase a Finally, we needed that certain

use. In their wildest dreams, they the bridge table: sheer luck. One of our

might even imagine being able to members found a small plot of waste,

design a building from the founda- scrubby land, in the corner of a council

tions up, incorporating everything playing field. We then endured a year

they could wish for – well, almost of negotiation and frustration over

everything! deeds of variation, leases and planning

For Stamford Bridge Club that permission.

dream is coming true, but how could After the frustration, came the little

this be achieved without a ‘fairy god- problem of raising over £100,000 in

The Stamford Club has reached its for loans as widely as possible, asking

goal through the wholehearted support members to offer loans of £1,000 each.

future of the club sufficiently to been truly excellent, ensuring our

for a new purpose-built club house. It Building is progressing well. We

proud. where there will be a superb playing

Obviously, the prime requirement is area, excellent teaching facilities, and

a thriving membership. The club must all the equipment perma nently

welcome all bridge players, of all standards. And to back this up, installed to run top-class duplicate bridge.

the club must have an active teaching programme, so new blood is It’s still hard to believe, but just sometimes – with enthusiasm

always being introduced. As a result of all this effort we have a and determination from your membership – you can make a

In the photo: Founding Chairman of Pembury Bridge Club, Geoff

Chairman, Elspeth Fox. The cake was made and iced by Rita Miller, a

long-standing member of the club, and says '15' on top, not

conventionally by using digits, but by counting the values of the three

aces and the king that decorate it.

Pembury is a thriving bridge club, situated in Tunbridge Wells,

Kent, which tries to keep membership to 150 by having a waiting list

to join. For information, visit www.pemburybc.co.uk