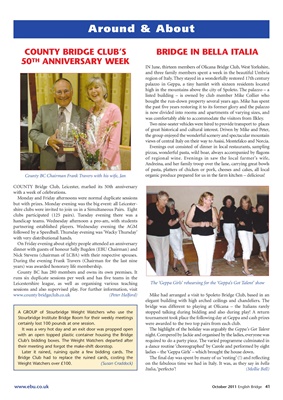 and three family members spent a week in the beautiful Umbria

region of Italy. They stayed in a wonderfully restored 17th century

palazzo in Geppa, a tiny hamlet with sixteen residents located

high in the mountains above the city of Spoleto. The palazzo – a

listed building – is owned by club member Mike Collier who

bought the run-down property several years ago. Mike has spent

is now divided into rooms and apartments of varying sizes, and

was comfortably able to accommodate the visitors from Ilkley.

Two nine-seater vehicles were hired to provide transport to places

of great historical and cultural interest. Driven by Mike and Peter,

the group enjoyed the wonderful scenery and spectacular mountain

views of central Italy on their way to Assisi, Montefalco and Norcia.

Evenings out consisted of dinner in local restaurants, sampling

of regional wine. Evenings in saw the local farmer’s wife,

Andreina, and her family troop over the lane, carrying great bowls

of pasta, platters of chicken or pork, cheeses and cakes, all local

County BC Chairman Frank Travers with his wife, Jan organic produce prepared for us in the farm kitchen – delicious!

with a week of celebrations.

but with prizes. Monday evening was the big event: all Leicester-

shire clubs were invited to join us in a Simultaneous Pairs. Eight

clubs participated (125 pairs). Tuesday evening there was a

followed by a Speedball. Thursday evening was 'Wacky Thursday'

On Friday evening about eighty people attended an anniversary

dinner with guests of honour Sally Bugden (EBU Chairman) and

Nick Stevens (chairman of LCBA) with their respective spouses.

During the evening Frank Travers (Chairman for the last nine

County BC has 280 members and owns its own premises. It

Leicestershire league, as well as organising various teaching The ‘Geppa Girls’ rehearsing for the ‘Geppa’s Got Talent’ show

www.county bridgeclub.co.uk (Peter Halford) Mike had arranged a visit to Spoleto Bridge Club, based in an

elegant building with high arched ceilings and chandeliers. The

bridge was different to playing at Olicana – the Italians rarely

A GROUP of Stourbridge Weight Watchers who use the stopped talking during bidding and also during play! A return

certainly lost 100 pounds at one session. were awarded to the two top pairs from each club.

with an open topped plastic container housing the Bridge night. Compered by Jackie and organised by the ladies, everyone was

Club’s bidding boxes. The Weight Watchers departed after required to do a party piece. The varied programme culminated in

their meeting and forgot the make-shift doorstop. a dance routine ‘choreographed’ by Carole and performed by eight

Later it rained, ruining quite a few bidding cards. The ladies – the ‘Geppa Girls’ – which brought the house down.

Bridge Club had to replace the ruined cards, costing the The final day was spent by many of us ‘resting’ (!) and reflecting

Weight Watchers over £100. (Susan Craddock) on the fabulous time we had in Italy. It was, as they say in bella