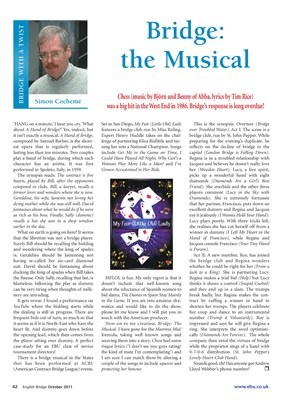 Chess (music by Björn and Benny of Abba, lyrics by Tim Rice)

was a big hit in the West End in 1986. Bridge’s response is long overdue!

‘HANG on a minute,’ I hear you cry. ‘What Set in San Diego, My Fair (Little Old) Lady This is the synopsis: Overture (Bridge

about A Hand of Bridge?’ Yes, indeed, but features a bridge club run by Miss Ruling. over Troubled Water). Act I: The scene is a

it isn’t exactly a musical. A Hand of Bridge, Expert Henry Huddle takes on the chal- bridge club, run by St. John Pepper. While

composed by Samuel Barber, is the short- lenge of partnering Eliza Bidlittle and tur- preparing for the evening’s duplicate, he

est opera that is regularly performed, ning her into a National Champion. Songs reflects on the decline of bridge in the

lasting less than ten minutes. Two couples include Get Me to the Game on Time, I capital (London Bridge is Falling Down).

play a hand of bridge, during which each Could Have Played All Night, Why Can’t a Regina is in a troubled relationship with

character has an arietta. It was first Woman Play More Like a Man? and I’ve Jacques and believes he doesn’t really love

performed in Spoleto, Italy, in 1959. Grown Accustomed to Her Bids. her (Wooden Heart). Lucy, a free spirit,

The synopsis reads: The contract is five picks up a wonderful hand with eight

hearts, played by Bill, after the opponents diamonds (Diamonds Are a Girl’s Best

competed in clubs. Bill, a lawyer, recalls a Friend). She overbids and the other three

former lover and wonders where she is now. players comment (Lucy in the Sky with

Geraldine, his wife, laments not loving her Diamonds). She is extremely fortunate

dying mother while she was still well. David that her partner, Francisco, puts down an

as rich as his boss. Finally, Sally (dummy) eye it jealously (I Wanna Hold Your Hand).

recalls a hat she saw in a shop window Lucy plays poorly. With three tricks left,

earlier in the day. she realises she has cut herself off from a

What on earth is going on here? It seems winner in dummy (I Left My Heart in the

that the librettist was not a bridge player. Hand of Francisco), while Regina and

and wondering where the king of spades is Frozen).

is. Geraldine should be lamenting not Act II: A new member, Roy, has joined

suit. David should be fantasising about whether he could be right for her (From a

ducking the king of spades when Bill takes Jack to a King). She is partnering Lucy.

the finesse. Only Sally, recalling that hat, is MFLOL is fun. My only regret is that it Regina makes a trial bid (Help) but Lucy

blameless; following the play as dummy doesn’t include that well-known song thinks it shows a control (Stupid Cuebid)

can be very tiring when thoughts of milli- about the reluctance of Spanish women to and they end up in a slam. The trumps

It gets worse. I found a performance on in the Game. If you are into amateur dra- tract by ruffing a winner in hand to

YouTube where the bidding starts while matics and would like to do the show, shorten her trumps. The players celebrate

the dealing is still in progress. There are please let me know and I will put you in her coup and dance to an instrumental

frequent bids out of turn, so much so that touch with the American producer. number (Trump it Voluntarily). Roy is

it seems as if it is North-East who have the Now on to my creation, Bridge: The impressed and says he will give Regina a

heart fit. And dummy goes down before Musical. I have gone for the Mamma Mia! ring. She interprets the word optimisti-

the opening lead, which then comes from formula, taking well known songs and cally (Diamonds Are Forever). The whole

the player sitting over dummy. A perfect weaving them into a story. Chess had some company then extol the virtues of bridge

There is a bridge musical in the States I am sure I can match them by altering a Lovely Heart-Club Hand).

that has been performed at ACBL couple of the songs to include squeeze and Sounds good, eh? Has anyone got Andrew