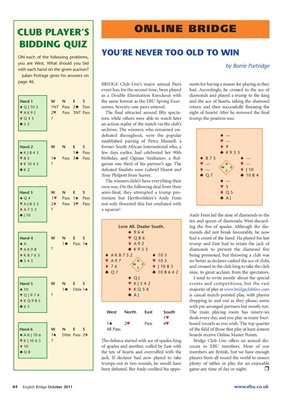 ON each of the following problems,

YOU’RE NEVER TOO OLD TO WIN

you are West. What should you bid

Julian Pottage gives his answers on

event has, for the second time, been played had. Accordingly, he crossed to the ace of

Hand 1 W N E S the same format as the EBU Spring Four- and the ace of hearts, taking the diamond

™ AK92 2™ Pass 3NT Pass The final attracted around fifty specta- eight of hearts! After he removed the final

tQ43 ? tors, while others were able to watch later trump, the position was:

®53 an action-replay of the match via the club’s

archives. The winners, who remained un-

defeated throughout, were the popular ´ —

established pairing of Petra Mansell, a ™ —

The winners didn’t have everything their ´ —

own way. On the following deal from their ™ 5

® J 10 Andy Fenn led the nine of diamonds to the

Love All. Dealer South. ing the five of spades. Although the dia-

´ 964 monds did not break favourably, he now

´ QJ I tend to write mostly about the special

tKQ985 dropping in and out as they please, some

®63 with pre-arranged partners but mostly not.

1™ deals every day, and you play as many four-

t 10 of spades and another, ruffed by East with count to EBU members. Most of our

®Q8 the ten of hearts and overruffed with the members are British, but we have enough

jack. If declarer had now played to take players from all round the world to ensure

trumps out in two rounds, he would have plenty of tables in play for an enjoyable

been defeated. But Andy credited his oppo- game any time of day or night. r