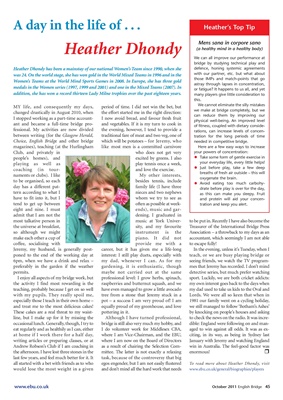 Heather Dhondy (a healthy mind in a healthy body)

We can all improve our performance at

bridge by studying technical play and

Heather Dhondy has been a mainstay of our national Women’s Team since 1990, when she defence, honing systemic agreements

was 24. On the world stage, she has won gold in the World Mixed Teams in 1996 and in the with our partner, etc. but what about

those IMPs and match-points that go

Women’s Teams at the World Mind Sports Games in 2008. In Europe, she has three gold

astray through lapses in concentration,

addition, she has won a record thirteen Lady Milne trophies over the past eighteen years. many players give little consideration to

MY life, and consequently my days, period of time. I did not win the bet, but We cannot eliminate the silly mistakes

we make at bridge completely, but we

changed drastically in August 2010, when the effort started me in the right direction:

can reduce them by improving our

I stopped working as a part-time account- I now avoid bread, and favour fresh fruit physical well-being. An improved level

ant and became a full-time bridge pro- and vegetables. If it is my turn to cook in of fitness, coupled with dietary conside-

fessional. My activities are now divided the evening, however, I tend to provide a rations, can increase levels of concen-

between writing (for the Glasgow Herald, traditional fare of meat and two veg, one of tration for the long periods of time

Choice, English Bridge and other bridge which will be potatoes – for Jeremy, who needed in competitive bridge.

magazines), teaching (at the Hurlingham like most men is a committed carnivore Here are a few easy ways to increase

Club, and privately in who does not get very your powers of concentration:

people’s homes), and excited by greens. I also • Take some form of gentle exercise in

playing as well as play tennis once a week, your everyday life, every little helps!

coaching (in tour - and love the exercise. • Just before play, take a few deep

breaths of fresh air outside – this will

to be organised, so each besides tennis, include

day has a different pat- family life (I have three

• Avoid eating too much carbohy-

drate before play is over for the day,

tern according to what I nieces and two nephews as this can make you sleepy. Fruit

have to fit into it, but I whom we try to see as and protein will aid your concen-

tend to get up between often as possible at week- tration and keep you alert.

eight and nine. I must ends), music and gar -

admit that I am not the dening. I graduated in

most talkative person in music at York Univer- to be put in. Recently I have also become the

the universe at breakfast, sity, and my favourite Treasurer of the International Bridge Press

make each other a cup of piano. It did not accountant, which seemingly I am not able

coffee, socialising with provide me with a to escape fully!

Jeremy, my husband, is generally post- career, but it has given me a life-long In the evening, unless it’s Tuesday, when I

poned to the end of the working day at interest: I still play duets, especially with teach, or we are busy playing bridge or

6pm, when we have a drink and relax – my dad, whenever I can. As for my seeing friends, we watch the TV program-

preferably in the garden if the weather gardening, it is enthusiastic, though mes that Jeremy has recorded. I don’t mind

permits. maybe not carried out at the same detective series, but much prefer watching

I enjoy all aspects of my bridge work, but professional level: I grow herbs, spinach, sport. Luckily, we are both cricket addicts:

the activity I find most rewarding is the raspberries and butternut squash, and we my own interest goes back to the days when

teaching, probably because I get on so well have even managed to grow a little avocado my dad used to take us kids to the Oval and

with my pupils. They really spoil me, tree from a stone that Jeremy stuck in a Lords. We were all so keen that when in

especially those I teach in their own home – pot – a success I am very proud of! I am 1981 our family went on a cycling holiday,

and treat me to the most delicious cakes! equally proud of my greenhouse, and love we still managed to follow ‘Botham’s Ashes’

These cakes are a real threat to my waist- pottering in it. by knocking on people’s houses and asking

line, but I make up for it by missing the Although I have turned professional, to check the news on the radio. It was incre-

occasional lunch. Generally, though, I try to bridge is still also very much my hobby, and dible: England were following on and man-

eat regularly and as healthily as I can, either I do volunteer work for Middlesex CBA, aged to win against all odds. It was as ex-

at home if I work there for a half day, where I am Vice-Chairman, and the EBU, citing, in its way, as being in Sydney last

writing articles or preparing classes, or at where I am now on the Board of Directors January with Jeremy and watching England

Andrew Robson’s Club if I am coaching in as a result of chairing the Selection Com- win in Australia. The feel-good factor was

the afternoon. I have lost three stones in the mittee. The latter is not exactly a relaxing enormous! r

last few years, and feel much better for it. It task, because of the controversy that big

all started with a bet with friends as to who egos engender, but I am not easily flustered To read more about Heather Dhondy, visit

would lose the most weight in a given and don’t mind all the hard work that needs www.ebu.co.uk/general/biographies/players