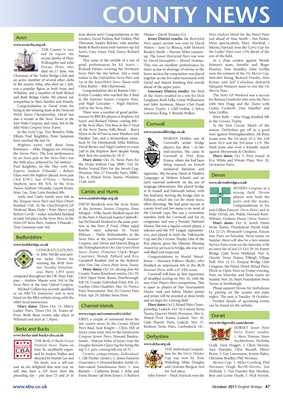 THE County is very

sad to report the

Palmer. up. The Lower Restricted Pairs was won rest of the field.

This came in the middle of a run of by David Humpleby – Muriel Holmes. In a close contest against Wendy

good performances by Ed Scerri – This was an excellent performance by Watson’s team, Jennifer and Roger

Richard Palmer, winning the Northants them as due to shortage of entries in the Floutier, Don Smedley, John Griffin

Swiss Pairs the day before, 2nd a week lower section the competition was played were the winners of the Vic Morris Cup.

Chairman of the Tudor Bridge Club and

earlier in the Oxfordshire Swiss Pairs and together as one five-table movement with Malcolm Young, Richard Horsley, Alan

an active member of several other clubs

in the county. John, who died on 2 July,

Chris Burley – Bill Charlwood. ahead of the upper pairs. Margaret Watson’s team to win the Vic

was a popular figure in both Avon and

Wiltshire, and a member of both Bristol

and Bath Bridge Clubs. We extend our

sympathies to their families and friends.

and Nigel Lancaster – Nigel Marlow, and John Seymour. Manor Club Frank with Alex Hogg and the Teams with

Congratulations to David Jones for

being in the winning team at the National

There were a number of good perfor- Lawrence-King, 3. Brenda Walker. John Griffin.

also a winner at the Swiss Teams in the

Scerri and Richard Palmer coming 8th= in the Corwen Trophy.

East Wales Congress, and came 3rd in the Cornwall

in the Swiss Pairs, Tim Rees in the A Final In the first County Match of the

of the Swiss Teams, Sally Brock – Barry season, Derbyshire got off to a good

Myers in the B Final as were Matthew and start against Nottinghamshire. All three

Heather Tan, and a tremendous come- MARIAN Holden, one of teams won: the 1st team 18-2, the 2nd

have reached the last 16.

back by Pat Dowdeswell, Mike Ribbins, Cornwall’s senior bridge team 20-0 and the 3rd team 11-9. The

David Barnes and Nigel Guthrie to come players, has died – in her third team also won a friendly match

2nd in the Brighton Bowl despite losing mid-nineties. She came to against Merseyside & Cheshire.

the Senior Pairs. The best performance

by an Avon pair in the Swiss Pairs was

Diary dates: Oct 16, Swiss Pairs for France, where she had been Eric White and Winter Plate. Nov 20,

Paul Keightley. In the Play with the

Butler Scored Pairs for the Jarrett Cup, mediaeval literature and

Glass were the highest-placed Avon pair

11am start. early national authority on the use of www.devonbridge.co.uk

Stephens were 4th N/S. In the Swiss

Andy and Cathy Smith were 6th in her husband, starting the bridge club in players won both the

www.cambsbridge.org.uk Helston, which she ran for many years,

the Torquay Swiss Pairs and Huw Oliver pairs and the teams.

finished 11th. At the Glos/Hereford GP DAVID Kendrick won the Swiss Teams often directing. She had great success at Congratulations to Joe

Weekend, Brian Dyde – Peter Sherry and at the Summer Seniors Congress, Peter county level and her name is on most of and Gillian Fawcett (Swiss Pairs) and to

in joint 3rd place in the Swiss Pairs. In the in the Pairs A Final and Joanne Caldwell – member both for Cornwall and for its Webster, Graham Hoare (Swiss Teams).

Tony Gammon were 3rd. tion in the Pairs B Final. Other equal Master. She was a regular county player, a Swiss Teams, Thurlestone Parish Hall.

Milman – Nadia Stelmashenko in the tive, and played in both the Tollemache Inn; Pairs on Saturday, Swiss teams on

Bedfordshire Swiss Pairs at the Scarborough Summer Cup and the Corwen Trophy. One of the Sunday; there will also be a two-session

www.bedsbridge.co.uk Congress, and Trevor and Marion King in first players given the Dimmie Fleming Novice Pairs event on the Saturday with

the Nottinghamshire One Day Green Point Award for services to bridge, she was very an entry fee of just £5. Oct 29-30, Exeter

as an EBUTA instructor and is now Master rank and below. Master points by playing on the county sim pairs

Final. Apr 29, Jubilee Swiss Pairs. and prizes will be awarded at three levels nights. The next is Tuesday 18 October.

other local instructors. and we hope for a strong field. Further details of upcoming events

Wilstead and start at 7.30pm. FIRST, a couple of omissions from the

and we are delighted that next year we Inter-island Simultaneous Pairs: 1. Ann and Graham Burgess tied Norman, Hugh Kevill-Davies, Jon