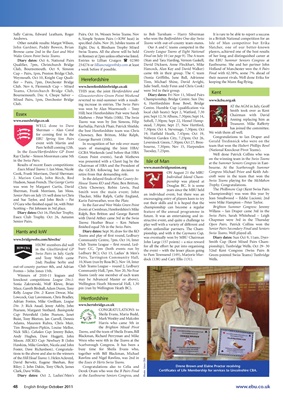 Andrews. 6, Simple System Pairs (+IOW heat) in who won the Bedfordshire One-day Swiss in a British National competition for an

John Gardner, Paddy Bowen, Brian Eight. Dec 4, Bloxham Trophy Mixed Our A and C teams competed in the Slatcher, one of our better-known

Browse came 2nd in the East and West Swiss Teams. All the above will be held County League Teams of Eight National players, achieved one of the best results

Wales Green Point Swiss Teams. in Romsey at 2pm unless otherwise listed. Final on July 10 (see page 9). The A team of her long and distinguished career at

Club, Bournemouth. Oct 9, Simeon a week before if possible. Hancock, Alan Kay and David Walker) Holland of Manchester won the A Pairs

Teams, Christchurch Bridge Club, THIS year, the joint Herefordshire and were 3rd in their group.

Centre. Humble Cup (qualification via AT the AGM in July, Geoff

was won by Alan Wearmouth – Tony Smith took over as Kent

Mathews – Peter Watts (10th). The Swiss Anning replacing him as

for coming first in the Chowney, Ben Britton, Mike Ralph,

Leverstock Green, 7.30pm; Oct 27, Brox- Gerald Tredinnick who were on the

event with Martin and In recognition of her role over many

In the Essex/Hertfordshire GP Event GCBA Weekends (and before that HBA Tuesday, 7.25pm.

Green Point events), Sarah Mathews on the winning team in the Swiss Teams

in the Swiss Pairs. was presented with a Claret Jug by the Isle of Man

Results of recent Essex competitions: at the Summer Seniors Congress in East-

Chairman of HBA and the President of www.manxbridgeunion.org bourne. At the Scarborough Summer

retire from that demanding role. croft were in the team that won the

2. Marion Cook, John Birch, Rod In the delayed finals of the County In- Individual Island Cham-

Hudson, Susan French. The George Curtis pionship was played at Swiss Teams playing for the McMahon

was won by Margaret Curtis, David Chris Chowney, Robin Lewis, Paul Douglas BC. It is some

Smith won the main event; John Championship) was won this year by

Senior Pairs on July 13: well done to Chris an individual event, but there was an

O’Gara who finished equal 1st, with Peter out their skills and it is hoped that the

Essex Club Trophy. Oct 26, Autumn future. It was an entertaining and in-

Senior Pairs. structive event, and quite a challenge to

play well with a variety of different and

Teams and play of first round, Ledbury was eventually won by MBU Chairman Diary dates: Sun Oct 9, 11am, Dyer-

HIOW members did well Club Teams League – first round, Led- for all the effort he put into organising pionship), Tunbridge Wells. Oct 29- 30

in the Glos/Hereford GP bury CC, 7pm (both events run by the event – with the lesser places going 52nd Kent Congress (Swiss Pairs &

knockout competitions: League Div.1: may be Advanced Master or above),

Moore. HICKO Cup: Newbury B (John Wren who were 4th in the Teams at the

Hawkins, Mike Gowlett, Nicola and John Scarborough Congress. It has been a

tions to the above and also to the winners together with Bill Blackman, Michael

of the Hill Head Teams: 1. Helen Ackroyd, Rawlins and Nigel Rawlins, was 2nd in

Clark, Dave Willis. Derek Oram who won the B Pairs Final Certificates of Life Membership for services to Lincolnshire CBA.

Diary dates: Oct 2, Ladies’/Men’s at the Eastbourne Seniors Congress, and