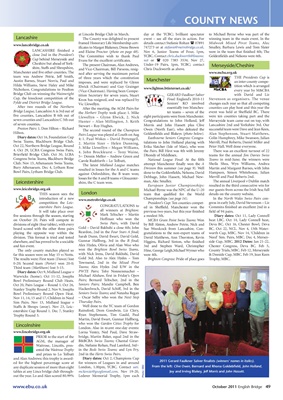 at Lincoln Bridge Club in March. day at the YCBC; brilliant spectator to Michael Byrne who was part of the

Lancashire The County was delighted to present event – see all the stars in action. For winning team in the main event. In the

LANCASHIRE finished a and Elaine Proctor (photo on page 48). Nov 6, Junior Teams of Four, 1pm, were in the team that finished 4th; The

close 2nd in the President’s The Committee wish to thank Paul YCBC. Contact chris.duckworth@lineone. Goldenfields and Nelsons were 6th.

Cheshire but ahead of York- The present Chairman, Alan Andrews, Under-19 Pairs, 1pm, YCBC; contact

and Vice-Chairman, Bill Parsons, resig- Chris Duckworth as above.

Manchester and five other counties. The ned after serving the maximum period www.mcba.org.uk

team was Andrew Petrie, Jeff Smith, of three years which the constitution THE Presidents Cup is

Austin Barnes, Stuart Norris, Paul and imposes, and were replaced by Glynn

(Vice-Chairman). Having been Compe- every year by M&CBA

Cup, the knockout competition of the Knox has resigned, and was replaced by Final: England’s 2010-11 Stevenson as organisers. The venue

After two rounds of the Northern After the meeting, the AGM Pairs for essentially two Manches- counties can play host and this year the

Bridge League, Lancashire A is 3rd out of the Herbert Trophy took place: 1. Mike ter teams – seven of the event was held at Sheffield BC. There

five counties, Lancashire B 6th out of Llewellyn – Glynn Elwick, 2. Nick eight participants were from Manchester. were ten counties taking part and the

Preston Pairs: 1. Don Hilton – Richard The second round of the Champion Owen (North East), who defeated the successful team were Dave and Jean Keen,

4. Oct 29, LCBA Congress Swiss Pairs, the Pairs. Bill Hirst was 4th with Jeremy There was an excellent turnout of 22

resulted in losses for the A and C teams

against Oxfordshire, the B team won;

losses for the A and B teams v Gloucester- Debbage, John Hassett, Michael New- Merrill and Paul Roberts 2nd.

European Junior Championships: resulted in the third consecutive win for

www.leicsbridge.org.uk Michael Byrne was the NPC of the U-20 our guests from across the Irish Sea; full

THIS season sees the London team that qualified for the World details on the county website.

estershire Pairs League. CONGRATULATIONS to ed in Sheffield. Manchester won the Commins finished an excellent 2nd in a

It will take place over all winners at Brighton: previous two years, but this year finished field of 94 pairs.

playing the opposite way within the Reardon, 2nd in the Four Stars A final; gratulations to the non-expert teams of worth Cup, MBC. Nov 14, ‘Children in

elsewhere, and has proved to be a sociable Gunnar Hallberg, 3rd in the B final; Higgins, Richard Sinton, who finished side Cup, MBC. 2012 Dates: Jan 21-22,

far this season were on May 15 vs Notts. with Nick Irens, David Bakhshi, David were 4th. & Deeside Cup, MBC. Feb 19, Jean Keen

who won the Garden Cities Trophy for

PRIOR to the start of the bridge, Martin Baker, equal 2nd in the

ented the Waitrose Trophy in the Beds Swiss Teams; and Lyn Fry,

and prizes to Lo Tolbutt 2nd in the Herts Swiss Pairs.

out the year. Lo and Alan scored 80.99% Lederer Memorial Trophy, 1pm each