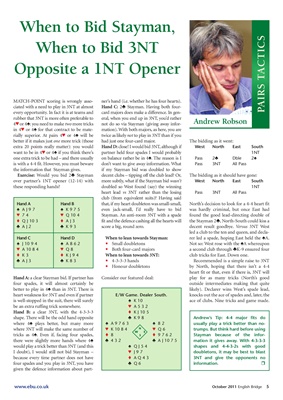 When to Bid Stayman,

When to Bid 3NT

Opposite a 1NT Opener

MATCH-POINT scoring is wrongly asso- ner’s hand (i.e. whether he has four hearts).

ciated with a need to play in 3NT at almost Hand C: 2® Stayman. Having both four-

every opportunity. In fact it is at teams and card majors does make a difference. In gen-

rubber that 3NT is more often preferable to eral, when you end up in 3NT, you’d rather

4™ or 4´: you need to make two more tricks not do so via Stayman (giving away infor- Andrew Robson

rially superior. At pairs 4™ or 4´ will be twice as likely not to play in 3NT than if you

better if it makes just one more trick (those had just one four-card major. The bidding as it went:

extra 20 points really matter): you would Hand D: close! I would bid 3NT, although if West North East South

one extra trick to be had – and there usually on balance rather be in 4´. The reason is I Pass 2® Dble 2´

is with a 4-4 fit. However, you must beware don’t want to give away information. What Pass 3NT All Pass

the information that Stayman gives. if my Stayman bid was doubled to show

Exercise: Would you bid 2® Stayman decent clubs – tipping off the club lead? Or, The bidding as it should have gone:

club (from equivalent suits)? Having said

Hand A Hand B that, if my heart doubleton was small-small, North’s decision to look for a 4-4 heart fit

t Q J 10 3 t AJ3 fit and the defence cashing all the hearts will the Stayman 2®, North-South could kiss a

led a club to the ten and queen, and decla-

Hand C Hand D When to lean towards Stayman: rer led a spade, hoping East held the ´A.

• Honour doubletons by North, hoping that there isn’t a 4-4

heart fit or that, even if there is, 3NT will

Hand A: a clear Stayman bid. If partner has Consider our featured deal: play for as many tricks (North’s good

four spades, it will almost certainly be outside intermediates making that quite

better to play in 4´ than in 3NT. There is likely). Declarer wins West’s spade lead,

heart weakness for 3NT and even if partner E/W Game. Dealer South. knocks out the ace of spades and, later, the

is well-stopped in the suit, there will surely ´ K 10 ace of clubs. Nine tricks and game made.

be an extra ruffing trick somewhere. ™ A532

shape. There will be the odd hand opposite ® K98 Andrew’s Tip: 4-4 major fits do

I doubt), I would still not bid Stayman – ™ J97 doubletons, it may be best to blast

four spades and you play in 3NT, you have ® Q6 information. r

given the defence information about part-