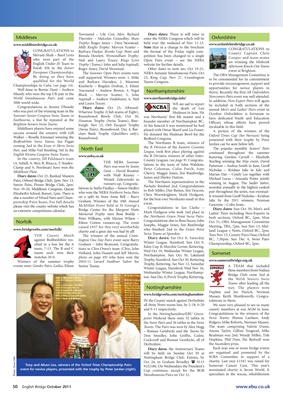 Middlesex Thornley – Malcolm Connolley. Shaw enter the NEBA Congress which will be Oxfordshire

Mills Knight Trophy: Mervyn Scutter – Note that in a change to the brochure CONGRATULATIONS to

CONGRATULATIONS to Barbara Hacker. Brooke Cup: Peter and the format of the Friday night com-

Brenda Howlett. Wymondham Trophy: petition has been changed to a single Cooper and team-mates

who were part of the Neil and Laura Tracey. Kings Lynn Open Pairs event – see the NEBA

English Under-20 Team to on winning the Midweek

finish 4th in the Junior Roger Amey, David Newstead. Other dates to note are: Oct 19-21,

By doing so they have well supported. Winners were: 1. Mike 23, King Cup. Nov 27, Cramlington

qualified for the World to be commended for its commitment

Mundy who were the top UK pair in the Block – Mervyn Scutter, 5. John

38th world-wide. and Laura Tracey. WE are sad to report

Congratulations to Jeremy Dhondy be included in both sections of the

who was part of the winning team in the Wharton Trophy (Club teams of Eight), Shulman in June. He

Roundwood Bowls Club. Oct 30, was Northants’ first life master and a have dedicated Youth and Education

Eastbourne, a feat he repeated at the Houston Trophy (Swiss Teams), Baw- founder member of Northampton BC.

burgh. Nov 13, Orb Pacquot Trophy At his funeral it was mentioned he had invaluable in this field.

clays Bank Trophy (Qualifiers only), He donated the Shulman Bowl for the Oxford Times Cup (for Novices) being

The Northants B team, winners of Jordan can be seen below left.

League, took first place playing against continued throughout the summer

English Riviera Congress Swiss Teams. www.neba.co.uk the B Division winners of other Inter-

lations to the team of John Walshaw, Patterson – Andrea Smith in June, Geoff

Clamp and A. Perelman) have won the Pairs was won by Jenny

The Northants representatives in the winning in August. The Sadler Salver,

to Rob Miller, Dan Baines, Jim Deacon, pair throughout the series, was eventual-

Elizabeth’s School, Barnet, 1pm. There is who won the NEBA Northern Swiss Pairs

for the best-ever Northants result in this Jalie by the 2011 winners, Norman

an extensive competitions calendar. Bridge Centre for the Margaret Watts

raised £957 for this very worthwhile

charity and a great day was had by all!

The winners of the annual Cram-

ulted in a loss for the A Winter League, Stamford. Sun Oct 9, Championship, Oxford BC, 2pm.

Senior Teams. A TEAM that included

Teams after leading all the

Nottinghamshire way. The players were

IN the County match against Derbyshire tulations to them.

and 9-11 respectively. county members at our AGM in June.

In the Nottinghamshire/EBU Green- Congratulations to the winners of the

the Swiss Pairs and 26 tables in the Swiss Ridgers, Mike Roberts, Norman Massey.

Teams. The Pairs was won by Alex Hogg The team comprising Valerie Dunn,

Diary dates: the Anniversary Teams Each year one or more bridge events

Nottingham Bridge Club. Entries, by SCBA Committee in support of a

Tony and Alison Lee, winners of the Oxford Times Championship Pairs 9232186. On Wednesdays the President’s Somerset Cancer Care. This year’s

event for novice players, presented with the trophy by Peter Jordan (right). Cup continues, except for the BGB nominated charity is Secret World. It

Simultaneous Pairs on Oct 12. specialises in the rescue, rehabilitation