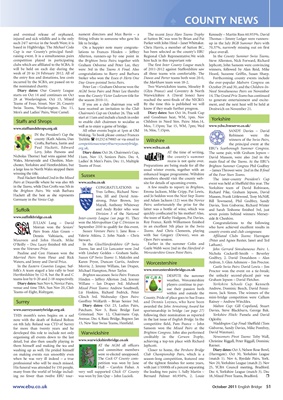 such 24/7 service in the South West; it is life to bridge. Parker with John Hind – Janet Whittaker. up in the July BGB Summer Pairs with

based in Highbridge. The Michael Coda On a happier note many congratu- Chris Harris, a member of Sutton BC, 70.37%, narrowly missing out on first

Cup is our County’s principal fund- lations to Frances Hinden – Jeffrey has been selected as the county’s EBU place overall.

raising event. It is a simultaneous pairs Allerton, runners-up by one point in Regional Club Representative.We wish In the County Summer Swiss Teams,

competition played in participating the Brighton Swiss Pairs; together with him luck in this important role Steve Allerston, Nick Forward, Richard

clubs which are affiliated to the SCBA. It Graham Osborne and Peter Lee, they The first Inter County League match Jephcott, John Sansom were convincing

will be held on each day during the were 3rd in the Teams A Final. Also of 2011-2012 against Staffordshire saw winners, followed by Alan Reid, Mike

week of 20 to 24 February 2012. All of congratulations to Barry and Barbara all three teams win comfortably. The Heard, Suzanne Griffin, Susan Sharp.

the entry fees and donations, less costs Stoker who won the Essex & Herts One Dawes and Porter teams both won 20-0, Forthcoming county events include

incurred by the SCBA, are passed on to Day Green-pointed Swiss Pairs. the Markham team won 18-2. the ever-popular Malvern Congress on

the nominated charity. Peter Lee – Graham Osborne won the Two Warwickshire teams, Moseley B October 29 and 30, and the Children-In-

starts on Oct 14 and continues on Oct won the County Victor Ludorum title for Warwickshire A (David Jones) have 14. The Grand Prix Teams has continued

28 at Woolavington. Oct 15, Mixed the season 2010-11. reached the semi-finals of the NICKO. to generate entertainment and excite-

Teams of Four, Street. Nov 20, County If you are a club chairman you will By the time this is published we will ment, and the next heat will be held at

Swiss Teams, Woolavington. Dec 11, have received an invitation to the Club know if they made further progress. Droitwich on November 21.

start at 11am and include a lunch in order and Goodman heat, WM, 1pm. Nov

Staffs and Shrops to enable club chairmen to socialise as Children in Need Sim. Pairs: Mon.14,

All other events begin at 1pm at Old SANDY Davies – David

IN the President’s Cup the Woking. To book please contact Frances Robinson were the

Crofts, Barbara, Justin and competitionsecretary@surreycountybridge. the principal event at the

Levy, John Parsons and Diary dates: Oct 26, Chairmen’s Cup, AT the time of writing, The same pair, with Graham Jepson –

Nicholas Thorne) had wins against Mid 11am. Nov 13, Seniors Pairs. Dec 4, the county’s summer David Musson, were also 2nd in the

Wales, Merseyside and Cheshire, Man- Ladies’ & Men’s Pairs. Dec 11, Multiple recess is not quite over. main final of the Teams. At the EBU’s

chester, Yorkshire and Herefordshire, but Teams of Four. Preparations are being made for all the Brighton Summer Congress Phil Godfrey

a large loss to North Wales stopped them usual winter events, together with an – James Thrower were 2nd in the B final

Pairs at Deauville where he was also 4th www.sccba.co.uk site for details of upcoming events. event was held at Sheffield this year. The

in the Teams, while Dan Crofts was 5th in CONGRATULATIONS to A few results to report: in Brighton, Yorkshire team of David Robinson,

Hackett all the best as she represents ton, Jill and David Arm- and Jo Seddon won the Next Step Teams Musson, Frank Littlewood, Tony McNiff,

Suffolk and Andy Ryder who won latter was a bottle of wine, which was and Sarah Teshome finished 3rd, just

Division 3 of the National quickly confiscated by his mother! Also, seven points behind winners Mersey-

Morran won the Seniors’ September 2010 to qualify for this event. in an excellent 5th place in the Swiss who have achieved excellent results in

O’Reilly – Doc Lacey finished 4th and In the Glos/Herefordshire GP Swiss Earlier in the summer Colin and Latham).

Hertfordshire by 12-8, but the B and C Brighton successes: Swiss Pairs: Frances DESPITE the summer the unlucky second-placed pair was

Teams-of-Eight, Risbygate. Liz Hoskins, Richard Fedrick, Peter within and outside the more, Jack Simm. The winners of the

note with the death of Roland Bolton Avenue. Dec 4, Basic Bridge, Bognor. Jan in the last issue of English Bridge. In the Oglesby.

for more than twenty years and he Sansom won the Mixed Pairs at the Gisborne, Sandy Davies, Mike Pomfrey,

developed this role to include not only Warwickshire Brighton Congress. John also performed David Waxman).

organising all events down to the last creditably in the Corwen Trophy, Newcomers Pivot Teams: Toby Wall,

them himself and making the tea and AT the AGM all officers Jephcott. Rayner.

washing up as well. He prided himself and committee members Closer to home, the Pershore Bridge Diary dates: Oct 3, Nelson Rose Bowl,

on making events run smoothly even were re-elected unopposed. Club Championship Pairs, which is a (Harrogate). Oct 30, Yorkshire League

professional who will be much missed. petition was won by Jane of the tightest finishes for some years, Nov 20, Yorkshire League (match 2). Nov

His funeral was attended by 150 people, Hall – Carolyn Fisher. A with just 1/1000th of a percent separating 25, YCBA Council meeting, Bradford.