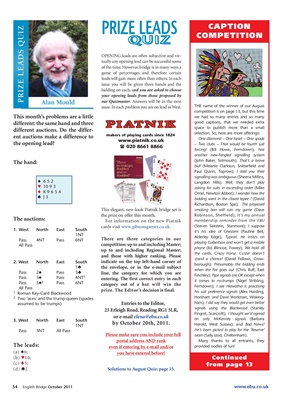 tually any opening lead can be successful some

of the time. However, bridge is in many ways a

game of percentages and therefore certain

leads will gain more often than others. In each

issue you will be given three hands and the

bidding on each, and you are asked to choose

your opening leads from those proposed by

Alan Mould our Quizmaster. Answers will be in the next

issue. In each problem you are on lead as West. THE name of the winner of our August

competition is on page 13, but this time

different: the same hand and three good captions, that we needed extra

space to publish more than a small

different auctions. Do the differ- selection. So, here are more offerings:

the opening lead? – Two clubs – That would be fourth suit

Paul Quinn, Toprow); I told you their

the prize on offer this month. Robinson, Sheffield); It’s my annual

The auctions: For information on the new Piatnik membership reminder from the EBU

Pass 4NT Pass 6NT There are three categories in our

playing Culbertson and won’t get a mobile

All Pass competition: up to and including Master;

up to and including Regional Master;

and those with higher ranking. Please

1® the envelope, or in the e-mail subject when the fire goes out (Chris Ruff, East

Pass 2´ Pass 3® line, the category for which you are Finchley); Pipe signals are OK except when

Pass 3´ Pass 4NT1 entering. The first correct entry in each it comes to no-trumps (Nigel Stribling,

All Pass Ferndown); I see Hiawatha is practising

assumed to be trumps) Entries to the Editor, ham); I did say they would get even better

or e-mail elena@ebu.co.uk on only McKenney signals (Barbara

Please make sure you include your full team (Sally Izod, Cheltenham).

postal address AND rank Many thanks to all entrants, they

The leads: even if entering by e-mail and/or provided oodles of fun!