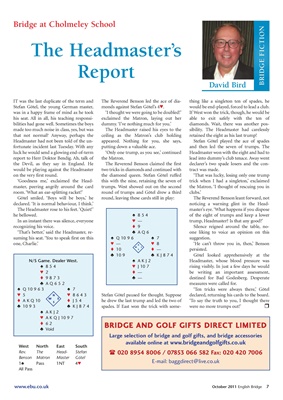 IT was the last duplicate of the term and The Reverend Benson led the ace of dia- thing like a singleton ten of spades, he

Stefan Götel, the young German master, monds against Stefan Götel’s 4™. would be end-played, forced to lead a club.

was in a happy frame of mind as he took ‘I thought we were going to be doubled!’ If West won the trick, though, he would be

his seat. All in all, his teaching responsi- exclaimed the Matron, laying out her able to exit safely with the ten of

bilities had gone well. Sometimes the boys dummy. ‘I’ve nothing much for you.’ diamonds. Wait, there was another pos-

that not normal? Anyway, perhaps the ceiling as the Matron’s club holding retained the eight as his last trump!

Headmaster had not been told of the un- appeared. Nothing for you, she says, Stefan Götel played the ace of spades

fortunate incident last Tuesday. With any putting down a valuable ace. and then led the seven of trumps. The

luck he would send a glowing end-of-term ‘Only one trump, as you see,’ continued Headmaster won with the eight and had to

the Devil, as they say in England. He The Reverend Benson claimed the first declarer’s two spade losers and the con-

would be playing against the Headmaster two tricks in diamonds and continued with tract was made.

on the very first round. the diamond queen. Stefan Götel ruffed ‘That was lucky, losing only one trump

‘Goodness me,’ exclaimed the Head- this with the nine, retaining the seven of trick when I had a singleton,’ exclaimed

master, peering angrily around the card trumps. West showed out on the second the Matron. ‘I thought of rescuing you in

room. ‘What an ear-splitting racket!’ round of trumps and Götel drew a third clubs.’

Götel smiled. ‘Boys will be boys,’ he round, leaving these cards still in play: The Reverend Benson leant forward, not

declared. ‘It is normal behaviour, I think.’ noticing a warning glint in the Head-

The Headmaster rose to his feet. ‘Quiet!’ master’s eye. ‘What happens if you dispose

he bellowed. ´ 854 of the eight of trumps and keep a lower

In an instant there was silence, everyone ™ — trump, Headmaster? Is that any good?’

recognizing his voice. t 9 Silence reigned around the table, no-

‘That’s better,’ said the Headmaster, re- ® AQ6 one liking to voice an opinion on this

™ 2 t — be writing an important assessment,

™ 5 N ™ 8643 Stefan Götel paused for thought. Suppose declared, returning his cards to the board.

Large selection of bridge and golf gifts, and bridge accessories