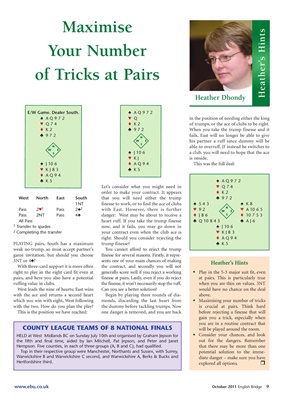 of Tricks at Pairs

´ AQ972 ™ Q in the position of needing either the king

fails, East will no longer be able to give

W E his partner a ruff since dummy will be

N able to overruff. If instead he switches to

order to make your contract. It appears t K2

right. Should you consider rejecting the t AQ94

weak no-trump, so must accept partner’s You cannot afford to reject the trump

game invitation, but should you choose finesse for several reasons. Firstly, it repre-

3NT or 4´? sents one of your main chances of making

With three-card support it is more often the contract, and secondly you will not

right to play in the eight card fit even at generally score well if you reject a working • Play in the 5-3 major suit fit, even

pairs, and here you also have a potential finesse at pairs. Lastly, even if you do reject at pairs. This is particularly true

ruffing value in clubs. the finesse, it won’t necessarily stop the ruff. when you are thin on values. 3NT

West leads the nine of hearts; East wins Can you see a better solution? would have no chance on the deal

with the ace and returns a second heart Begin by playing three rounds of dia- above.

which you win with eight, West following monds, discarding the last heart from • Maximising your number of tricks

with the two. How do you plan the play? the dummy before tackling trumps. Now is crucial at pairs. Think hard

This is the position we have reached: one danger is removed, and you are back before rejecting a finesse that will

gain you a trick, especially when

you are in a routine contract that

COUNTY LEAGUE TEAMS OF 8 NATIONAL FINALS will be played around the room.

HELD at West Midlands BC on Sunday July 10th and organised by Graham Jepson for • Consider your chances, and look

the fifth and final time, aided by Ian Mitchell, Pat Jepson, and Peter and Janet out for the dangers. Remember

Hempson. Five counties, in each of three groups (A, B and C), had qualified. that there may be more than one

Top in their respective group were Manchester, Northants and Sussex, with Surrey, potential solution to the imme-