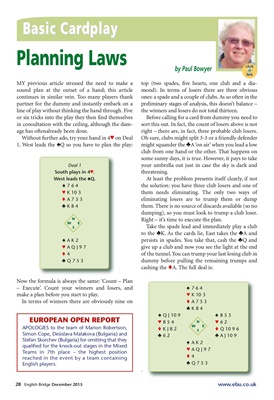 MY previous article stressed the need to make a

sound plan at the outset of a hand; this article

continues in similar vein. Too many players thank

partner for the dummy and instantly embark on a

line of play without thinking the hand through. Five

or six tricks into the play they then find themselves

in consultation with the ceiling, although the dam age

Without further ado, try your hand in 4™ on Deal

1. West leads the ´Q so you have to plan the play:

Now the formula is always the same: 'Count - Plan

- Execute'. Count your winners and losers, and

make a plan before you start to play.

In terms of winners there are obviously nine on

ones: a spade and a couple of clubs. As so often in the

the winners and losers do not total thirteen.

Before calling for a card from dummy you need to

sort this out. In fact, the count of losers above is not

right - there are, in fact, three probable club losers.

Oh sure, clubs might split 3-3 or a friendly defender

might squander the ®A 'on air' when you lead a low

club from one hand or the other. That happens on

some sunny days, it is true. However, it pays to take

your umbrella out just in case the sky is dark and

At least the problem presents itself clearly, if not

the solution: you have three club losers and one of

them needs eliminating. The only two ways of

eliminating losers are to trump them or dump

them. There is no source of discards available (so no

dumping), so you must look to trump a club loser.

Right - it's time to execute the plan.

Take the spade lead and immediately play a club

to the ®K. As the cards lie, East takes the ®A and

persists in spades. You take that, cash the ®Q and

of the tunnel. You can trump your last losing club in

dummy before pulling the remaining trumps and

cashing the tA. The full deal is:

APOLOGIES to the team of Marion Robertson,

Stefan Skorchev (Bulgaria) for omitting that they

qualiied for the knock-out stages in the Mixed

reached in the event by a team containing