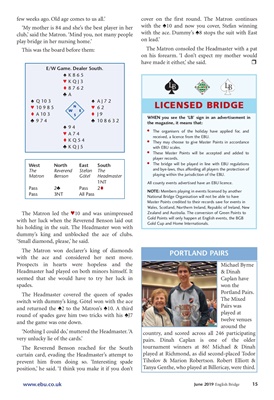 few weeks ago. Old age comes to us all.'

'My mother is 84 and she's the best player in her

club,' said the Matron. 'Mind you, not many people

play bridge in her nursing home.'

This was the board before them:

The Reverend Stefan The

The Matron led the ™10 and was unimpressed

with her luck when the Reverend Benson laid out

his holding in the suit. The Headmaster won with

dummy's king and unblocked the ace of clubs.

with the ace and considered her next move.

Prospects in hearts were hopeless and the

Headmaster had played on both minors himself. It

seemed that she would have to try her luck in

The Headmaster covered the queen of spades

switch with dummy's king. Götel won with the ace

round of spades gave him two tricks with his ´J7

and the game was one down.

'Nothing I could do,' muttered the Headmaster. 'A

very unlucky lie of the cards.'

The Reverend Benson reached for the South

prevent him from doing so. 'Interesting spade

position,' he said. 'I think you make it if you don't

cover on the first round. The Matron continues

with the ´10 and now you cover, Stefan winning

with the ace. Dummy's ´8 stops the suit with East

The Matron consoled the Headmaster with a pat

on his forearm. 'I don't expect my mother would

have made it either,' she said. r

the magazine, it means that:

• They may choose to give Master Points in accordance

• These Master Points will be accepted and added to

• The bridge will be played in line with EBU regulations

and bye-laws, thus affording all players the protection of

National Bridge Organisation will not be able to have

Master Points credited to their records save for events in

Zealand and Australia. The conversion of Green Points to

Gold Points will only happen at English events, the BGB

country, and scored across all 246 participating

pairs. Dinah Caplan is one of the older

played at Richmond, as did second-placed Todor

Tanya Genthe, who played at Billericay, were third.