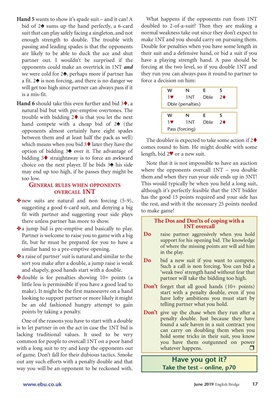 suit that can play safely facing a singleton, and not

enough strength to double. The trouble with

passing and leading spades is that the opponents

are likely to be able to duck the ace and shut

partner out. I wouldn't be surprised if the

opponents could make an overtrick in 1NT and

we were cold for 2´, perhaps more if partner has

a fit. 2´ is non forcing, and there is no danger we

will get too high since partner can always pass if it

Hand 6 should take this even further and bid 3t, a

natural bid but with pre-emptive overtones. The

trouble with bidding 2t is that you let the next

hand compete with a cheap bid of 2´ (the

between them and at least half the pack as well)

which means when you bid 3t later they have the

option of bidding 3´ over it. The advantage of

bidding 3t straightaway is to force an awkward

choice on the next player. If he bids 3´ his side

may end up too high, if he passes they might be

suggesting a good 6-card suit, and denying a big

fit with partner and suggesting your side plays

there unless partner has more to show.

Da jump bid is pre-emptive and basically to play.

Partner is welcome to raise you to game with a big

fit, but he must be prepared for you to have a

similar hand to a pre-emptive opening.

Da raise of partner' suit is natural and similar to the

sort you make after a double, a jump raise is weak

and shapely, good hands start with a double.

Ddouble is for penalties showing 10+ points (a

little less is permissible if you have a good lead to

make). It might be the first manoeuvre on a hand

looking to support partner or more likely it might

be an old fashioned hungry attempt to gain

points by taking a penalty.

One of the reasons you have to start with a double

lacking traditional values. It used to be very

common for people to overcall 1NT on a poor hand

with a long suit to try and keep the opponents out

of game. Don't fall for their dubious tactics. Smoke

out any such efforts with a penalty double and that

way you will be an opponent to be reckoned with.

What happens if the opponents run from 1NT

doubled to 2-of-a-suit? Then they are making a

normal weakness take out since they don't expect to

make 1NT and you should carry on pursuing them.

Double for penalties when you have some length in

their suit and a defensive hand, or bid a suit if you

have a playing strength hand. A pass should be

forcing at the two level, so if you double 1NT and

they run you can always pass it round to partner to

force a decision on him:

The Dos and Don'ts of coping with a

Do raise partner aggressively when you hold

support for his opening bid. The knowledge

of where the missing points are will aid him

Do bid a new suit if you want to compete.

Such a call is non forcing. You can bid a

partner will take the bidding too high.

start with a penalty double, even if you

have lofty ambitions you must start by

telling partner what you hold.

Don't give up the chase when they run after a

penalty double. Just because they have

found a safe haven in a suit contract you

can carry on doubling them when you

hold some tricks in their suit, you know

you have them outgunned on power

Have you got it?

The doubler is expected to take some action if 2t

comes round to him. He might double with some

Note that it is not impossible to have an auction

where the opponents overcall 1NT - you double

them and when they run your side ends up in 3NT!

This would typically be when you held a long suit,

although it's perfectly feasible that the 1NT bidder

has the good 15 points required and your side has

the rest, and with it the necessary 25 points needed