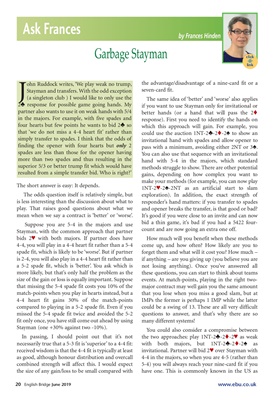 Stayman and transfers. With the odd exception

(a singleton club ) I would like to only use the

in the majors. For example, with five spades and

four hearts but few points he wants to bid 2® so

simply transfer to spades. I think that the odds of

finding the opener with four hearts but only 2

spades are less than those for the opener having

more than two spades and thus resulting in the

superior 5/3 or better trump fit which would have

resulted from a simple transfer bid. Who is right?'

the advantage/disadvantage of a nine-card fit or a

The same idea of 'better' and 'worse' also applies

if you want to use Stayman only for invitational or

better hands (or a hand that will pass the 2t

response). First you need to identify the hands on

which this approach will gain. For example, you

invitational hand with spades and allow opener to

pass with a minimum, avoiding either 2NT or 3´.

You can also use that sequence with an invitational

hand with 5-4 in the majors, which standard

methods struggle to show. There are other potential

gains, depending on how complex you want to

make your methods (for example, you can now play

exploration). In addition, the exact strength of

responder's hand matters: if you transfer to spades

and opener breaks the transfer, is that good or bad?

and are now going an extra one off.

How much will you benefit when these methods

come up, and how often? How likely are you to

forget them and what will it cost you? How much -

if anything - are you giving up (you believe you are

not losing anything). Once you've answered all

these questions, you can start to think about teams

may well gain you the same amount

that you lose when you miss a good slam, but at

IMPs the former is perhaps 1 IMP while the latter

could be a swing of 13. These are all very difficult

questions to answer, and that's why there are so

You could also consider a compromise between

invitational. Partner will bid 2™ over Stayman with

have one. This is commonly known in the US as

The short answer is easy: It depends.

The odds question itself is relatively simple, but

is less interesting than the discussion about what to

play. That raises good questions about what we

mean when we say a contract is 'better' or 'worse'.

Suppose you are 5-4 in the majors and use

Stayman, with the common approach that partner

bids 2™ with both majors. If partner does have

spade fit, which is likely to be 'worse'. But if partner

more likely, but that's only half the problem as the

size of the gain or loss is equally important. Suppose

match-points when you play in hearts instead, but a

compared to playing in a 5-2 spade fit. Even if you

fit only once, you have still come out ahead by using

In passing, I should point out that it's not

as good, although honour distribution and overcall

combined strength will affect this. I would expect

the size of any gain/loss to be small compared with