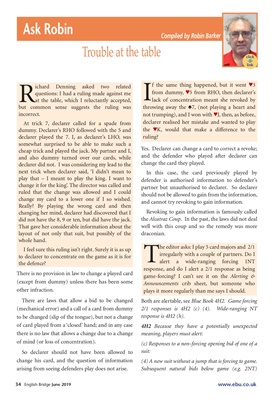 There is no provision in law to change a played card

(except from dummy) unless there has been some

There are laws that allow a bid to be changed

(mechanical error) and a call of a card from dummy

to be changed (slip of the tongue), but not a change

of card played from a 'closed' hand; and in any case

of mind (or loss of concentration).

So declarer should not have been allowed to

change his card, and the question of information

arising from seeing defenders play does not arise.

Trouble at the table

questions: I had a ruling made against me

at the table, which I reluctantly accepted,

but common sense suggests the ruling was

At trick 7, declarer called for a spade from

dummy. Declarer's RHO followed with the 5 and

declarer played the 7. I, as declarer's LHO, was

somewhat surprised to be able to make such a

cheap trick and played the jack. My partner and I,

and also dummy turned over our cards, while

declarer did not. I was considering my lead to the

next trick when declarer said, 'I didn't mean to

play that - I meant to play the king. I want to

change it for the king'. The director was called and

ruled that the change was allowed and I could

change my card to a lower one if I so wished.

Really? By playing the wrong card and then

changing her mind, declarer had discovered that I

That gave her considerable information about the

layout of not only that suit, but possibly of the

I feel sure this ruling isn't right. Surely it is as up

to declarer to concentrate on the game as it is for

irregularly with a couple of partners. Do I

response, and do I alert a 2/1 response as being

game-forcing? I can't see it on the Alerting &

Announcements crib sheet, but someone who

plays it more regularly than me says I should.

f the same thing happened, but it went ™3

from dummy, ™5 from RHO, then declarer's

lack of concentration meant she revoked by

throwing away the ´7, (not playing a heart and

not trumping), and I won with ™J, then, as before,

declarer realised her mistake and wanted to play

the ™K, would that make a difference to the

4H2 Because they have a potentially unexpected

(4) A new suit without a jump that is forcing to game.

Yes. Declarer can change a card to correct a revoke;

and the defender who played after declarer can

change the card they played.

In this case, the card previously played by

defender is authorised information to defender's

partner but unauthorised to declarer. So declarer

should not be allowed to gain from the information,

the Alcatraz Coup. In the past, the laws did not deal

well with this coup and so the remedy was more