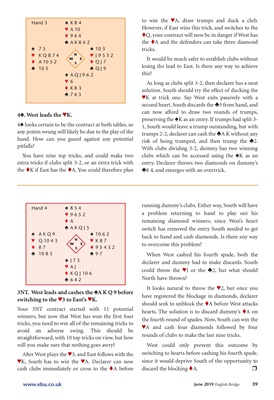 4´ looks certain to be the contract at both tables, so

hand. How can you guard against any potential

You have nine top tricks, and could make two

extra tricks if clubs split 3-2, or an extra trick with

the tK if East has the tA. You could therefore plan

to win the ™A, draw trumps and duck a club.

However, if East wins this trick, and switches to the

tQ, your contract will now be in danger if West has

the tA and the defenders can take three diamond

It would be much safer to establish clubs without

losing the lead to East. Is there any way to achieve

As long as clubs split 3-2, then declarer has a neat

solution. South should try the effect of ducking the

™K at trick one. Say West exits passively with a

second heart. South discards the ®3 from hand, and

can now afford to draw two rounds of trumps,

preserving the ´K as an entry. If trumps had split 3-

1, South would leave a trump outstanding, but with

trumps 2-2, declarer can cash the ®A K without any

risk of being trumped, and then trump the ®2.

clubs which can be accessed using the ´K as an

Your 3NT contract started with 11 potential

winners, but now that West has won the first four

tricks, you need to win all of the remaining tricks to

avoid an adverse swing. This should be

straightforward, with 10 top tricks on view, but how

will you make sure that nothing goes awry?

After West plays the ™3, and East follows with the

™K, South has to win the ™A. Declarer can now

cash clubs immediately or cross to the tA before

running dummy's clubs. Either way, South will have

a problem returning to hand to play out his

switch has removed the entry South needed to get

back to hand and cash diamonds. Is there any way

to overcome this problem?

When West cashed his fourth spade, both the

declarer and dummy had to make discards. South

could throw the ™J or the ®2, but what should

It looks natural to throw the ™2, but once you

have registered the blockage in diamonds, declarer

should seek to unblock the tA before West attacks

hearts. The solution is to discard dummy's tA on

the fourth round of spades. Now, South can win the

™A and cash four diamonds followed by four

rounds of clubs to make the last nine tricks.

West could only prevent this outcome by

switching to hearts before cashing his fourth spade,

since it would deprive South of the opportunity to