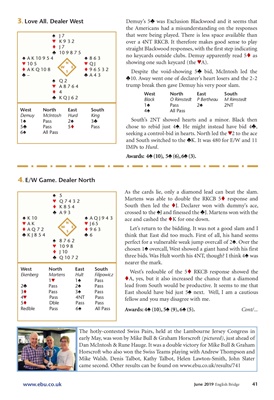 3. Love All. Dealer West Demuy's 5® was Exclusion Blackwood and it seems that

the Americans had a misunderstanding on the responses

that were being played. There is less space available than

over a 4NT RKCB. It therefore makes good sense to play

no keycards outside clubs. Demuy apparently read 5t as

showing one such keycard (the ™A).

Despite the void-showing 5® bid, McIntosh led the

South's 2NT showed hearts and a minor. Black then

seeking a control-bid in hearts. North led the ™2 to the ace

As the cards lie, only a diamond lead can beat the slam.

Martens was able to double the RKCB 5t response and

South then led the tJ. Declarer won with dummy's ace,

crossed to the ´J and finessed the ®J. Martens won with the

ace and cashed the tK for one down.

Let's return to the bidding. It was not a good slam and I

think that East did too much. First of all, his hand seems

perfect for a vulnerable weak jump overcall of 2´. Over the

chosen 1´ overcall, West showed a giant hand with his first

three bids. Was Hult worth his 4NT, though? I think 4´ was

West's redouble of the 5t RKCB response showed the

tA, yes, but it also increased the chance that a diamond

lead from South would be productive. It seems to me that

East should have bid just 5´ next. Well, I am a cautious

fellow and you may disagree with me.

The hotly-contested Swiss Pairs, held at the Lambourne Jersey Congress in

early May, was won by Mike Bull & Graham Horscroft (pictured), just ahead of

Dan McIntosh & Rune Hauge. It was a double victory for Mike Bull & Graham

came second. Other results can be found on www.ebu.co.uk/results/741