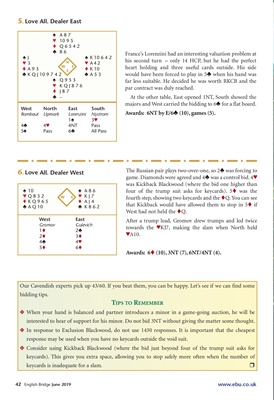 France's Lorenzini had an interesting valuation problem at

his second turn - only 14 HCP, but he had the perfect

heart holding and three useful cards outside. His side

far less suitable. He decided he was worth RKCB and the

At the other table, East opened 1NT, South showed the

majors and West carried the bidding to 6® for a flat board.

6. Love All. Dealer West The Russian pair plays two-over-one, so 2® was forcing to

game. Diamonds were agreed and 4® was a control bid. 4™

was Kickback Blackwood (where the bid one higher than

four of the trump suit asks for keycards). 5t was the

fourth step, showing two keycards and the tQ. You can see

that Kickback would have allowed them to stop in 5t if

West had not held the tQ.

After a trump lead, Gromov drew trumps and led twice

towards the ™KJ7, making the slam when North held

Our Cavendish experts pick up 43/60. If you beat them, you can be happy. Let's see if we can find some

D When your hand is balanced and partner introduces a minor in a game-going auction, he will be

interested to hear of support for his minor. Do not bid 3NT without giving the matter some thought.

D In response to Exclusion Blackwood, do not use 1430 responses. It is important that the cheapest

response may be used when you have no keycards outside the void suit.

keycards). This gives you extra space, allowing you to stop safely more often when the number of

keycards is inadequate for a slam. r