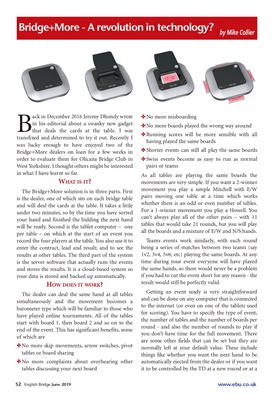 Bridge+More - A revolution in technology? by Mike Collier

in his editorial about a swanky new gadget

that deals the cards at the table. I was

transfixed and determined to try it out. Recently I

was lucky enough to have enjoyed two of the

Bridge+More dealers on loan for a few weeks in

order to evaluate them for Olicana Bridge Club in

in what I have learnt so far.

The Bridge+More solution is in three parts. First

is the dealer, one of which sits on each bridge table

and will deal the cards at the table. It takes a little

under two minutes, so by the time you have sorted

your hand and finished the bidding the next hand

will be ready. Second is the tablet computer - one

per table - on which at the start of an event you

record the four players at the table. You also use it to

enter the contract, lead and result; and to see the

results at other tables. The third part of the system

is the server software that actually runs the events

and stores the results. It is a cloud-based system so

your data is stored and backed up automatically.

HOW DOES IT WORK?

The dealer can deal the same hand at all tables

simultaneously and the movement becomes a

barometer type which will be familiar to those who

have played online tournaments. All of the tables

start with board 1, then board 2 and so on to the

end of the event. This has significant benefits, some

tables or board sharing

DNo more complaints about overhearing other

tables discussing your next board

DRunning scores will be more sensible with all

having played the same boards

DShorter events can still all play the same boards

DSwiss events become as easy to run as normal

As all tables are playing the same boards the

movements are very simple. If you want a 2-winner

movement you play a simple Mitchell with E/W

pairs moving one table at a time which works

whether there is an odd or even number of tables.

For a 1-winner movement you play a Howell. You

can't always play all of the other pairs - with 11

tables that would take 21 rounds, but you will play

all the boards and a mixture of E/W and N/S hands.

Teams events work similarly, with each round

being a series of matches between two teams (say

time during your event everyone will have played

the same hands, so there would never be a problem

result would still be perfectly valid.

Getting an event ready is very straightforward

and can be done on any computer that is connected

to the internet (or even on one of the tablets used

for scoring). You have to specify the type of event,

round - and also the number of rounds to play if

you don't have time for the full movement. There

are some other fields that can be set but they are

normally left at your default value. These include

things like whether you want the next hand to be

automatically ejected from the dealer or if you want