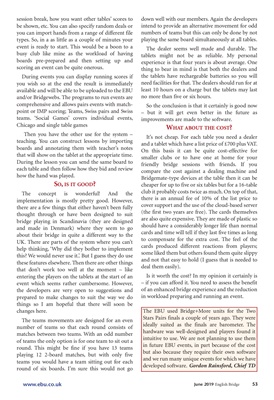 session break, how you want other tables' scores to

be shown, etc. You can also specify random deals or

you can import hands from a range of different file

types. So, in a as little as a couple of minutes your

event is ready to start. This would be a boon to a

busy club like mine as the workload of having

boards pre-prepared and then setting up and

scoring an event can be quite onerous.

During events you can display running scores if

you wish so at the end the result is immediately

available and will be able to be uploaded to the EBU

and/or Bridgewebs. The programs to run events are

comprehensive and allows pairs events with matchpoint or IMP scoring;

Then you have the other use for the system -

teaching. You can construct lessons by importing

boards and annotating them with teacher's notes

that will show on the tablet at the appropriate time.

During the lesson you can send the same board to

each table and then follow how they bid and review

how the hand was played.

The concept is wonderful! And the

implementation is mostly pretty good. However,

there are a few things that either haven't been fully

thought through or have been designed to suit

bridge playing in Scandinavia (they are designed

and made in Denmark) where they seem to go

about their bridge in quite a different way to the

UK. There are parts of the system where you can't

help thinking, 'Why did they bother to implement

this? We would never use it.'. But I guess they do use

these features elsewhere. Then there are other things

that don't work too well at the moment - like

entering the players on the tablets at the start of an

event which seems rather cumbersome. However,

the developers are very open to suggestions and

prepared to make changes to suit the way we do

things so I am hopeful that there will soon be

The teams movements are designed for an even

number of teams so that each round consists of

matches between two teams. With an odd number

round. This might be fine if you have 13 teams

playing 12 2-board matches, but with only five

teams you would have a team sitting out for each

round of six boards. I'm sure this would not go

down well with our members. Again the developers

intend to provide an alternative movement for odd

numbers of teams but this can only be done by not

playing the same board simultaneously at all tables.

The dealer seems well made and durable. The

experience is that four years is about average. One

thing to bear in mind is that both the dealers and

the tablets have rechargeable batteries so you will

need facilities for that. The dealers should run for at

least 10 hours on a charge but the tablets may last

no more than five or six hours.

So the conclusion is that it certainly is good now

- but it will get even better in the future as

improvements are made to the software.

WHAT ABOUT THE COST?

It's not cheap. For each table you need a dealer

and a tablet which have a list price of £700 plus VAT.

On this basis it can be quite cost-effective for

smaller clubs or to have one at home for your

friendly bridge sessions with friends. If you

compare the cost against a dealing machine and

Bridgemate-type devices at the table then it can be

club it probably costs twice as much. On top of that,

cover support and the use of the cloud-based server

(the first two years are free). The cards themselves

are also quite expensive. They are made of plastic so

should have a considerably longer life than normal

to compensate for the extra cost. The feel of the

some liked them but others found them quite slippy

Is it worth the cost? In my opinion it certainly is

- if you can afford it. You need to assess the benefit

of an enhanced bridge experience and the reduction

in workload preparing and running an event.

The EBU used Bridge+More units for the Two

Stars Pairs finals a couple of years ago. They were

ideally suited as the finals are barometer. The

hardware was well-designed and players found it

intuitive to use. We are not planning to use them

in future EBU events, in part because of the cost

but also because they require their own software

and we run many unique events for which we have