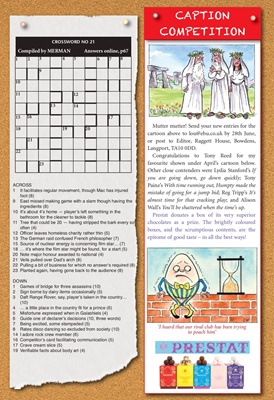 1 It facilitates regular movement, though Mac has injured

9 East missed making game with a slam though having the

bathroom for the cleaner to tackle (8)

23 Planted again, having gone back to the audience (8)

1 Games of bridge for three assassins (10)

5 Misfortune expressed when in Galashiels (4)

7 Being excited, some stampeded (5)

Mutter mutter! Send your new entries for the

cartoon above to lou@ebu.co.uk by 28th June,

Congratulations to Tony Reed for my

favourite shown under April's cartoon below.

Other close contenders were Lydia Stanford's If

you are going down, go down quickly; Tony

Paine's With time running out, Humpty made the

mistake of going for a jump bid; Reg Tripp's It's

almost time for that cracking play; and Alison

Wall's You'll be shattered when the time's up.

Prestat donates a box of its very superior

chocolates as a prize. The brightly coloured

boxes, and the scrumptious contents, are the

epitome of good taste - in all the best ways!

'I heard that our rival club has been trying